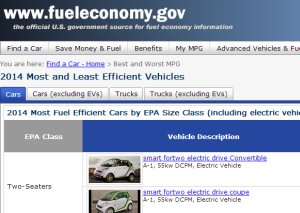 For those following fuel efficient and alternative fuel vehicles, two news items came out this past week that were worth paying attention to. Fuel economy ratings on new vehicles sold are increasing again after dropping for two months. The corporate average fuel economy rating reached 24.8 mpg in November – still down from the all-time high of 24.9 mpg recorded with August new vehicle sales in the US. Given that gasoline prices have softened this year, it is impressive to see the fuel efficiency rate go back to increasing.

The fuel economy numbers are being tracked by the University of Michigan Transportation Research Institute (UMTRI), which has been keeping score on CAFÉ numbers since October 2007. Fuel economy is up 4.7 mpg since that time, and improvements in greenhouse gas emission reductions were also acknowledged in the study.

In still more analysis of fuel economy and emissions, the US Environmental Protection Agency and Department of Energy have updated their annual rating for the most fuel-efficient cars now available on the market. Every single one of the top 10 is powered by electricity or a hybrid version with electric and gasoline power. The Chevrolet Spark EV, which gets the equivalent of 119 mpg, topped the list. The Nissan Leaf moved back to number four, and the Chevrolet Volt was number nine. The list of plug-in electric vehicles is getting longer in the US – it’s a lot more than the Leaf and Volt these days.

Toyota has two of the models on the top 10 list (actually there are 11 models overall since the Prius Plug-in tied for number 10 with the Ford Fusion Energi); The Toyota RAV4 EV is the other one on the list. Ford had two plug-ins models – the previously mentioned Fusion plug-in hybrid and the Focus Electric. Chevrolet had two models – the Volt and the fairly new Spark EV. The Tesla Model S with the 85 kilowatt hour power pack made the list at No. 8 (which some people would holler over). The Honda Fit EV finished at second place, the Fiat 500e came in at third, the Mitsubishi i-MiEV was number five, and the Smart ForTwo in coupe and cabriolet versions was number six.

Plug-ins have been getting kudos in high-level ratings this year – even though the competition is tough from fuel efficient gasoline small cars, clean diesel engines, and hybrids.