Spotlight on Tesla safety in China and the U.S.
The electric vehicle manufacturer is facing scrutiny over two safety issues that have dogged the 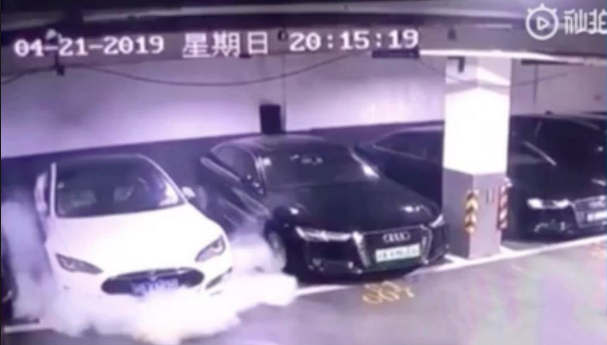 company for years — fires starting in its battery packs, and crashes happening while its Autopilot semi-autonomous driving system had been activated. Reports have emerged on a Tesla fire in a Hong Kong parking log. Weeks before, a video streamed on Chinese social media platforms showed a Tesla Model S bursting into flames in a Shanghai garage. Startup competitor Nio said last month that one of its ES8 models caught future in Xi’an while being repaired. In the U.S., the National Transportation Safety Board said in a preliminary report that Tesla’s Autopilot system was active at the time of a fatal Model 3 crash in Delray Beach, Fla. That involved a collision between a Model 3 and a semi truck on March 1st. NTSB reported that the Model 3 driver had activated Autopilot about 10 seconds before the collision, and that for about eight seconds before the crash, the Model 3 didn’t detect the driver’s hands on the wheel. Tesla is rolling out an over-the-air software update for the Model S and Model X to improve safety and battery life as it continues investigating the cause of the Hong Kong fire; and issued a statement on the Autopilot incident.

CARB’s Mary Nichols confronts White House over emissions rules
California Air Resources Board Chairman Mary Nichols was set to deliver comments that won’t go well with the Trump administration today during a meeting with California air quality and transportation agencies. Nichols is arguing that the state will match any relaxation of federal auto rules with its own more stringent anti-pollution requirements on everything from fuel to the refineries producing it. The state may be joining a few countries in eventually banning fossil-fuel powered vehicles. These comments were made as the Trump administration readies a final plan for easing emission and fuel economy standards. “CARB will be exploring ways to ensure communities get the reductions of air pollution they so desperately need to keep the air clean and breathable — and continue to fight climate change,” Nichols said in draft remarks. “That might mean, for example, tougher requirements for low-carbon fuels, looking at tighter health-protective regulations on California refineries, doubling down on our enforcement efforts on mobile and stationary sources — and might lead to an outright ban on internal combustion engines.”

What will happen in GM’s Lordstown Plant?
Last week, President Donald Trump set off a wave of attention when tweeting that General Motor’s Lordstown Plant would be bought by Workhorse Group, Inc., even though the deal had not been settled. GM had been in discussions with electric truck startup Rivian, but those talks ended. Since then, Ford has since agreed to invest $500 million in Rivian. Details have yet to come out on GM’s role in the Lordstown Plant, and whether Workhore’s W-15 electric truck will be part of it. There’s also speculation out there that the plant could be where Workhorse builds electric mail trucks for the US Postal Service; but the company would first have to win that contract.

Check out Jon LeSage’s blog:
Interested in topics other than sustainable transportation? You can check out my blog to read about a few others, such as:
“Why I’m a pragmatist, and why you’re one too”
My favorite school of American philosophy, pragmatism, was based on what I see as a few simple questions: Does it work for me? Do I buy into it? What’s in it for me?
“Grocery shopping for Instacart customers who really really really need to have it delivered”
Grocery store shopping and delivery for Instacart, Incidents #1-5……….
“How a failed rock critic turned working writer — and a big fan of Lester Bangs and rock ’n’ roll”
You may have noticed that my blog is defined as: “writings, reviews, and ramblings from a failed rock critic turned working writer.” Ok, what’s the story behind the failed rock critic? Was there an internship with Rolling Stone, Spin, Entertainment Weekly, Billboard, or American Songwriter that failed to turn into a job?
“Best rock n’ roll song moments ever in movies, in my opinion”
The Rolling Stones, ‘Jumpin’ Jack Flash’ in ‘Mean Streets’ (1973). Director Martin Scorsese is credited for forging a unique connection between pop music and film, and having a lot of influence on younger filmmakers who followed his lead. But wait, there’s more……..
“Mystery guest sits next to my hospital bed, nudging me to stay alive”
Here’s Chapter 1 in a book I’m putting together, based on my experience in 2007 temporarily dying from encephalitis; and what living has been like since then. The book has the working title, Fall Down 7 Times, Get Up 8.
You’ll have to hit the Older Posts link at the bottom of the first page to see some of these blog posts, and there are more. You may be wondering why I do it, and placed an image of chimpanzees typing away, trying to write a book. I got hooked on writing when I was a child. My mother had been a newspaper reporter for a short period, and worked as a secretary. She would type our term papers, and boy did we get good grades. But she was my fist mentor in writing and editing. The best part is writing about topics I’m fascinated with and love learning more about. Telling the story teaches me a lot as well, and gives me a platform for sharing information that I want to spread with fans of electric vehicles and clean transportation, music and pop culture, spiritual/philosophical experiences (a la pragmatism), and more.
You can sign up for a free newsletter going out when a new piece is posted on the blog. And if you haven’t done so yet, please sign up for Green Auto Market — see the box to the right. This helps me find out what readers are most interested in, so I can stay current and keep the newsletter and blog as lively as possible.

High-speed rail takes off, but what about the U.S.?
High-speed rail continues to take off in Asia, with Thai companies building a $6.8 billion rail project that will link three major airports in the country. That follows Japan’s Kawasaki Heavy Industries and Hitachi beginning testing of Alfa-X, a train capable of hitting a maximum speed of 400 km/h (248 mph). These projects support government efforts to boost investments in hi-tech industrials, robotics, and electric vehicles; and to begin unclogging traffic-jammed roadways.
What about the U.S.? The country continues to fail other leading countries, with California slowly moving forward on its long-promised high-speed rail project and other rail projects stalling. The money isn’t really there yet, but a few companies are looking for a way to bring the rail technology — which is popular in Europe and Asia — across the U.S. Automakers and air travel are fighting it, but the biggest block is funding. The U.S. has more cost per mile in building rail with resolving private property ownership, utility rules, environmental mitigation, and labor costs. Growing traffic congestion and air pollution are thought to be behind companies supporting innovative high-speed rail test projects around the country.