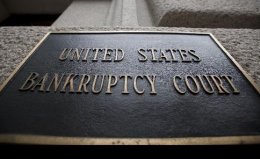 US Bankruptcy Judge Kevin Gross would like to see the Fisker Automotive bankruptcy procedure speeded up. The troubled automaker may be sold by January 3 under a fast-track schedule approved by the Wilmington, Del., court judge. The bankruptcy filing took place on November 22, and the typical asset bidding process is being circumvented. Fisker said the process already happened when the US Dept. of Energy held an auction for the $168.5 million loan that it made to Fisker. An affiliate of Chinese company Hybrid Tech Holdings LLC won the auction and only paid $25 million for the Fisker assets. The judge admitted it was an unusual process but seems to agree that the auction process has been moving along. Creditors will also have access to a December 10 hearing that will decide whether a disclosure statement from Fisker has enough information for creditors to decide whether to oppose the liquidation plan.

Amazon will be dropping off your orders from the sky. You thought driverless cars accessing our roads by 2020 sounded pretty far out? How about aerial drones delivering packages for Amazon.com within the next five years? Amazon CEO Jeff Bezos unveiled the robotic airplane project on Dec. 1 during the CBS program “60 Minutes.” The vehicles could deliver up to five pounds in a 10-mile radius of Amazon’s 96 warehouses within 30 minutes, Bezos said. Bezos thinks it will be very green – much better than driving trucks around.

Nissan is working with NRG Energy’s subsidiary NRG eVgo to expand its electric vehicle charging station Freedom Station chain across Washington DC. Through this plan, eVgo is intending to develop a comprehensive fast charging network in the greater Washington area with charging stations at Dulles Town Center in Loudon County, Arlington County, and District of Columbia at Van Ness. In addition, two stations are currently being constructed in Rockville and Towson in Maryland alongside other sites under development stages across the Washington metropolitan area.

Check out the new zero emission vehicle (ZEV) Guidebook – a resource for California cities and counties to find where electric vehicle chargers and hydrogen stations are being installed. It comes from Governor Brown’s recent Executive Order that calls for California’s major metropolitan areas to complete infrastructure plans, improve permitting and complete other actions to accommodate ZEVs by 2015.

Installed an electric vehicle charger in your garage and you want a federal tax credit? Then you’d better do so by December 31, after which the credit expires. The credit covers 30% of the cost of purchase and installation, up to a maximum of $1,000, for installing an electric-car changing station in a private home. This means using Form 8911 with the tax filing due by April 15 of next year. There will also be expiration on that date of a 10% credit for the purchase price of an electric motorcycle or three-wheeled vehicle.

Mahindra Group has created an electric racing division and signed an agreement with Formula E Holdings. It’s now the eighth team to join the new FIA Formula E Championship. “Mahindra Racing” was a natural chain events, Mahindra said, since it’s been involved for some time in the production of EV through its Mahindra Reva Company. Mahindra Racing, if approved, will join in the Formula E championship with Andretti Autosport, Dragon Racing, Asia’s China Racing and Super Aguri and European teams Drayson Racing, e.dams, and Audi Sport ABT.