Here’s another look at forecasts predicting 2030 will be the watershed year to watch for when vehicles, transportation, and the entire auto industry itself will look quite different than it does today. This time, we’ll look at whether plug-in vehicles are likely to overtake internal combustion engine-powered vehicles by 2030.

A few interesting news briefs:
Battle over clean car rules:  General Motors, Toyota, FCA, Hyundai, and the National Automobile Dealers Association, are backing the Trump administration’s efforts to gut fuel economy standards and California’s ability to keep the bar high. These companies said that in a filing with a U.S. appeals court late on Monday, arguing the administration’s rule provided “vehicle manufacturers with the certainty that states cannot interfere with federal fuel economy standards.”
In July, Ford, Honda, and Volkswagen made a deal with California supporting the state’s policies. The Trump administration is preparing to roll back next month the fuel efficiency standards set by the Obama Administration and revoke California’s ability to set stricter clean-car standards, including the zero-emission vehicle (ZEV) mandate. Last month, the US Environmental Protection Agency and National Highway Traffic Safety Administration published its overhauled rule, called “SAFE Vehicles Rule Part One: One National Standard,” to take effect November 26.

Aftermath of GM strike:  The United Auto Workers and General Motors agreed to partner under their new contract to manage the impact of new technologies that could threaten thousands of jobs. The National Committee on Advanced Technology would meet quarterly review changes the automaker must implement as it tests 3D printing, plans to bring autonomous taxi rides to the streets, and globally rolls out 20 battery-electric vehicles that require fewer parts than their internal combustion counterparts. GM says these EV will come to market by 2023. The Chevrolet Bolt’s powertrain has 80 percent fewer moving parts than a comparable car with a gasoline engine, experts have said. And autonomous vehicles won’t need steering wheels, brake pedals and instrument panels, an expert said. The union has expressed concerns over thousands of jobs going away from these historic changes being made. The automaker has slashed its earnings forecast for 2019, saying that the strike would cost it around $3 billion in profits this year. Production was going back to full speed earlier this week.

Tesla earnings:  Tesla Inc’s third-quarter revenue fell 39 percent in the US, a regulatory filing showed. A record number of cars shipped in the third quarter of 2019 were enough to help Tesla turn a modest profit, according to financial figures released by the electric carmaker on Wednesday. The company reported $143 in net income, and $6.3 billion in revenue — down slightly from second quarter and down about $530 million from Q3 2018. Tesla reported that the drop in revenue comes from a tripling in the number of customers leasing its cars, mainly from Model 3 leases that launched in April of this year.

EV cash for clunkers:  US Senate Minority Leader Chuck Schumer (D-NY) proposed a plan last week in an op-ed piece that would provide car owners with “large discounts” if they trade in their polluting, gas-powered vehicles for “clean” electric ones. It would be similar to the the Obama administration’s “cash-for-clunkers” program initiated in 2009. The legislation has yet to be written and introduced, but is based on supporting that every vehicle on the road is zero-emission by 2040; and the legislation would result in 63 million fewer gasoline-powered cars on roads by 2030. 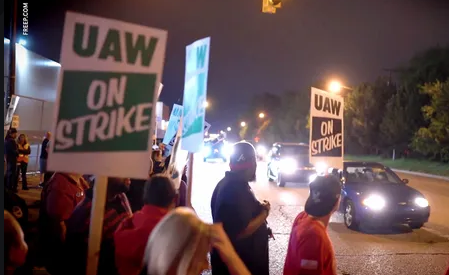 What to expect by 2030 part 2: What generation is most likely to lead the mobility transformation?