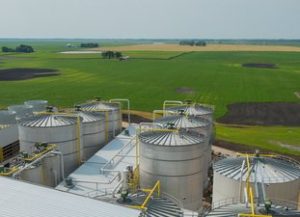 The grand opening of one of the world’s first cellulosic ethanol production facilities has given hope to the biofuels industry and to supporters of biofuels as an alternative to oil. The biofuels industry faces imminent changes from the US Environmental Protection Agency (EPA) on the Renewable Fuel Standard that will reduce production of ethanol and advanced biofuels. The EPA recently sent its revised rules to the White House for review and approval. A new advanced biofuels plant in Iowa shows an industry weathering diminishing government and public support, while also taking steps forward with investors and regional markets.

POET-DSM Advanced Biofuels, LLC, a joint venture between Royal DSM and POET, LLC, on Sept. 3 hosted the grand opening of “Project LIBERTY.” The plant converts baled corn cobs, leaves, husk, and stalk into renewable fuel at the cellulosic ethanol facility in Emmetsburg, Iowa. Those present at the ribbon cutting included His Majesty Willem-Alexander, King of the Netherlands, US Secretary of Agriculture Tom Vilsack, Iowa Governor Terry Branstad, and thousands of guests.

At full capacity, the plant will convert 770 tons of biomass per day to produce ethanol at a rate of 20 million gallons per year, later ramping up to 25 million gallons per year. Fuel from Project LIBERTY represents a greenhouse gas reduction of 85% to 95% over gasoline. It will consume 285,000 tons of biomass annually from a 45-mile radius of the plant. The plant employs more than 50 people directly, and biomass harvesting is creating another 200 indirect jobs in the community. Hundreds of people were involved in the construction of the plant.

“Some have called cellulosic ethanol a `fantasy fuel,` but today it becomes a reality,” said Jeff Broin, POET founder and executive chairman. “With access now to new sources for energy, Project LIBERTY can be the first step in transforming our economy, our environment and our national security.”

POET considers the cellulosic ethanol facility to be a huge step forward in the wider adoption of biofuels, both in North America and around the world. “It is also a victory for the Renewable Fuel Standard (RFS), which prompted increased investment into advanced biofuels that accelerated development of this new technology,” according to the press release.

The cellulosic ethanol plant isn’t the only biofuels investment seeing significant investment support lately. The challenges are there for regaining support for biofuels in the US. Freedonia has addressed the economic issues in its latest World Biofuels Report – which expects global biofuels to top 115 million metric tons in 2018, and will be up from 96.30 in 2013. As for the US, Freedonia has a less optimistic vision:  “Healthy growth will be experienced in all regions with the exception of North America, where conflicting government regulations and waning public support in the United States — the world’s largest market for biofuels — will limit advances.”