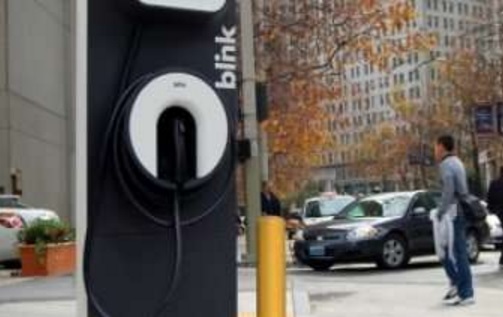 2013. Car Charging Group began operating thousands of Blink charging stations, and the software that manages, monitors, and tracks these stations and stores charging data. Blink Charging Co. also started a 1 for 50 reverse stock split, effective two days ago. After a period of 20 business days from then, the company’s stock symbol will be CCGID and will then revert to CCGI. The company’s website has switched over to www.BlinkCharging.com. “Changing the name of the Company to Blink Charging continues our integration efforts and corporate rebranding, which allows us to unify our identity and illustrates the company’s primary products and services,” stated Mike Calise, Blink Charging’s CEO. “The reverse split is also another step in the right direction towards achieving a listing on a national stock exchange and to build additional shareholder value.”

Bosch offering extended range:  Global auto supplier Bosch just released e-axle, a new electric axle combining three powertrain components into one unit – that will bring longer range to electric vehicles and hybrids and more torque and speed to these vehicles – and to compact cars, SUVs, and pickups. It’s capable of delivering between 50 and 300 kilowatts. Torque at the axle can cover a range of about 1,000 to 6,000 Newton meters (737 to 4,425 foot-pounds). EVs will be able to travel further on each charge, and they won’t have to draw more power from the battery with the new e-axle system in place. It’s being tested now with a few Bosch customers, and the supplier company says it will go into mass production starting in 2019. The German supplier says it has already provided components to over 500,000 hybrids and EVs out on roads.

Lift spreading across country:  Ride-hailing company Lyft is making a big move in its U.S. presence, expanding from eight states up to 40. The Uber competitor has been able to see growth in riders and revenue and recent years, and can now tap into chaos that the global ride-hailing giant entered into earlier this year. Lyft has been able to bring over a lot of customers and drivers from Lyft.

An upgraded smartphone app has helped, along with a new marketing campaign that’s helping Lyft grow from serving 160 more cities for a total of about 350. Lyft is an ideal situation, with its General Motors partnership and recent deals with other companies on autonomous vehicle test projects. Uber’s excessive market valuation and ability to raise about $14 billion in private equity since its inception is causing a huge shakeup as investors want to see transparent, professional management of the company. Uber this week hired Expedia CEO Dara Khosrowshahi to take the place of ousted and controversial founder Travis Kalanick. The new CEO is also known for being outspoken, and is expected to bring the company forward to an initial public offering within 18 to 36 months. Lyft co-founders Logan Green and John Zimmer work on keeping the company simple and direct. They say they haven’t done beyond asking employees and drivers to make sure passengers are treated like guests at a fine hotel.