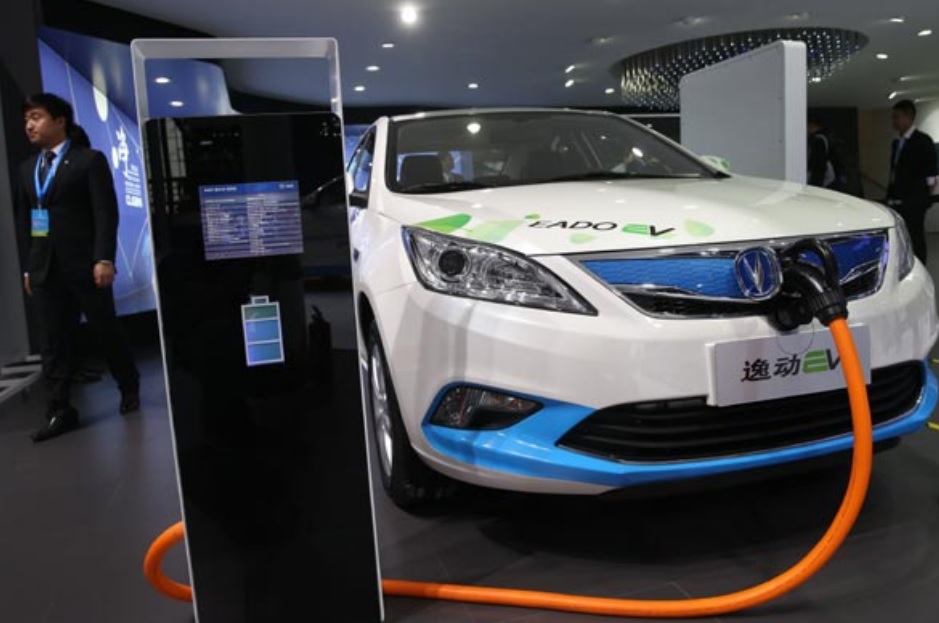 percentage points higher than an earlier proposal for next year, and applies to automakers selling at least 30,000 vehicles in that market. A credit system will be in place for sales of all-electric and plug-in hybrid electric vehicles, which is expected to offer a similar credit trading structure in place with California’s zero emission vehicle program where automakers can trade credits. China’s industry ministry announced the new regulations Thursday, along with news that the level will rise to 12% for 2020. The national government wants to support China’s leading role in EV sales, and to prepare for a long-term ban on fossil-fuel vehicles announced earlier this month. Global automakers this year have been requesting that China soften the mandates for new energy vehicle sales.

company, EV C.A. Spirit, to develop electric vehicles. New production electric models are expected to come out in 2019 and 2020. Toyota will own 90% of the new company, and Mazda and auto parts supplier Denso will split the remaining 10%. It follows an August announcement by the two Japanese carmakers on joint EV projects and a $1.6 billion investment in a new U.S. plant. Denso is known for making key components used in electrical systems for EVs and inverters for hybrid vehicles. The company is working on an energy efficient air conditioning system for EVs.

technology, announced in a speech Saturday that regulators are working on a timeline for phasing out the sales and production of the gasoline- and diesel-powered vehicles. Norway, France, and the UK, are already going in that direction. Almost 80 percent of the global auto market is heading toward an eventual phase-out of petroleum-powered cars through government incentives and mandates. It’s a big job – with about 695,000 of 84 million new vehicles sold last year being electric; and with about a billon vehicles out on roads across the world now.

Ford Transit Custom PHEV tested in London:  Fleets took a look at the Ford Transit Custom plug-in hybrid van in the Cenex Low Carbon Vehicle 2017 event in Millbrook, UK. Ford will be testing 20 of these vans with fleets over a 12-month trials starting later this year. It will go 31 miles on battery only and 310 miles on electric and its 1.0-liter EcoBoost gasoline engine. It’s supported by the Transport for London agency with the Metropolitan Police and several city-based companies participating in the trial. “Seeing the PHEV Transits on the road is an exciting milestone, and we look forward to teaming up with our London partners and customers to explore how these vans can reduce emissions and operator costs in the city,” said Mark Harvey, Director, urban electrified van program, Ford of Europe.

Cars, only expect to see half the profit margins now for EV compared to conventional internal combustion engine vehicles. That could break even, and EVs more price competitive, by 2025. Seeing battery prices come down will be a big part of it. More specifics were given on its electric fleet introductions – by 2022, there will be an electric version of every Mercedes model sold. It will be led by the new EQ electric brand, which Mercedes-Benz is overseeing. The Smart brand will stop selling vehicles with any internal combustion engines in 2020.

There continues to be a symbiotic relationship between the U.S. and China in plug-in electric vehicle manufacturing, sales, and technology development. Government subsidies are helping bring sales up, as are introductions of new models that are gaining more interest from consumers in both China and the U.S. More EVs are coming in the near future, and in more type classes, including a minivan and crossover SUVs in the U.S. market and diverse offerings in China. The Beijing Motor Show in April and May showed off an intriguing lineup of new EVs rolling out from BYD, Changjiang, Dongfeng, Brilliance, Beijing Auto, Changfeng, JAC, and others. The symbiotic relationship comes from alliances between global automakers and Chinese companies for EVs to be sold in China and eventually in other markets; and between the Chinese and American governments pushing for clean technologies and emissions reductions. There’s also a list of manufacturers and suppliers based in the U.S. that are building electric cars and technologies that will be shipped overseas and sold in China.

EV sales in China and the U.S.: China is number one in global EV sales, with the U.S. following and Europe seeing growth as a region. Deliveries of “new-energy vehicles” surged in China by 126% to 86,374 units in the five months through May, according to China Passenger Car Association. BYD Co.’s Tang SUV was the best seller in the plug-in hybrid category, while BAIC Motor Corp.’s BAIC E series was top-selling electric vehicle in the January-May period. The Chinese auto market had more than 26,000 new EVs sold in May, a 119% increase over the same month last year, The U.S. saw a very strong EV sales month in June with 7,678 battery electric vehicles and 6,094 plug-in hybrids for a total of 13,772 EVs sold. The previous U.S. record was in December 2015, when 13,274 were sold.

BYD leads the way in China: Altogether, BYD sold a total of 61,722 plug-in electric vehicles last year, with nearly all of them being sold in China. That was more EVs than Tesla, Nissan, or General Motors sold last year individually. BYD only sells plug-in electric vehicles, both battery electric and plug-in hybrid. Warren Buffet’s Berkshire Hathaway owns about a 10% stake in the Chinese company. According to year-end figures released by the company, it delivered 31,898 of the newer Qin plug-in hybrids and 18,375 Tang PHEVs, along with 7,029 of the older all-electric e6 battery electric models, during 2015. For the first five months of 2016 (as illustrated in the chart below), the BYD Tang has been the top seller in China at 15,615 units sold. The company also sold 2,888 Denza compact hatchback plug-ins last year, which were built by its joint venture with Daimler.

Role major Chinese automakers are playing: As mentioned, joint ventures such as Denza are playing a role in EV sales in China. Major Chinese automakers have their share of JVs with global automakers from the U.S., Europe, Japan, and South Korea. They’re contributing to EV sales through these partnerships and are backed by generous government incentives. If you view the Top 10 sales ranking above, you’ll notice that some of the top 10 Chinese automakers in overall vehicles sales are making inroads to EV sales. SAIC was number one in Chinese new vehicle sales last year; BAIC was number five; Chery was number nine, and the company includes the JAC brands in its lineup.

Electric-only brands: Kandi is another electric-only brand in China, along with BYD, seeing strong results in the top selling EVs. The Kandi K11 Panda EV is being manufactured through a joint venture with Chinese automaker Geely. Geely International Corp. was the number 10 selling automaker in Chinese new vehicle sales last year.

Tesla just starting in China: Tesla Motors sold 300 Model S units in May 2016, and 1,811 overall in 2016 through the end of May. It was number 19 on the top 20 plug-in electric vehicles sold in May 2016 in China – compared to No. 1 in U.S. plug-in sales during June 2016. Tesla has been investing heavily in major cities in China with retail stores and Supercharger installations.

U.S.-Based OEMs and Suppliers with Electric Drive Technologies and Chinese Investors: One of the more fascinating trends in the China-U.S. alliance in EV development has been the role that Chinese investors have played in sometimes saving U.S.-based companies. The former Fisker Automotive (now Karma Automotive) is now owned, along with lithium battery maker A123 systems, by major auto parts supplier Wanxiang Group. Here’s a list of these U.S.-based companies in EV technologies that will be interesting to watch in coming years:

SAIC partners with Disney: Chinese automaker SAIC is providing EVs for hourly rentals to Shanghai Disney Resort customers. SAIC will also provide a fleet of electric vans for shuttle service to the amusement park. SAIC currently operates a car-sharing service with 100 electric cars, as well as 100 electric buses that ferry tourists from nearby train stations, subway stations, and airports to the Disney resort.

Hyundai competing in Chinese market: As part of its initiative to roll out several hybrid, plug-in, and hydrogen fuel cell models, Hyundai Motor Co. says it will be going full-speed ahead in its electrified vehicle rollout to increase range and compete with upstart Chinese rivals. Hyundai has found out how extensive the EV market is becoming in China with foreign OEM alliances and small Chinese startups. Several global automakers are selling EVs in China, and must use electrical drivetrain components developed with a local Chinese supplier. The national rule has made Chinese suppliers more technologically savvy in key items such as motors and electrical control units, according to Hyundai.