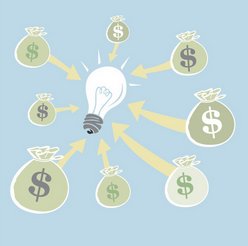 For those of you reading this article that are working for startups – or for major companies looking to dive into advanced vehicle technologies and infrastructures – there are five types of funding sources to consider tapping into:

Government Grants and Low-interest Loans:
As you probably know, the US Dept. of Energy’s Clean Cities coalitions lead the way on gaining access to federal and state grants and low-interest loans. If you haven’t already done so, become active with your local Clean Cities coalition. Automakers and their suppliers have tapped into low-interest loans through the federal Advanced Research Projects Agency – Energy (ARPA-E). State programs are particularly strong in California, and most other states have some grant funding and incentive programs in place. California Energy Commission continues to be the most significant state funding source, with South Coast Air Quality Management District’s Mobile Source Air Pollution Reduction Review Committee being another channel that the clean transportation community has to stay up on.

Overseas Investors
Startup companies in the US that are breaking into the market are finding that overseas investors might be the best (and sometimes, the only) capital source out there. Investments might come from India, Brazil, Israel, China, Spain, or United Arab Emirates. In recent years, most of these investments have come from Chinese government-backed companies with Wanxiang Group’s bailouts of Fisker Automotive and A123 Systems being the best-known examples. The ZAP and Jonway Auto alliance is another example of a US-based company (three-wheeled, low-speed electric vehicle maker ZAP) finding its needed cash flow through Chinese capital.

Private Equity and Venture Capital
Initial public offerings (IPOs), angel investors, joint ventures, corporate shareholders, private equity firms, and venture capital investors – these are a few of the elements that it takes for a small startup like Tesla Motors to become a major player. Angel investors typically provide capital at an early state of a startup’s development, followed by venture capital firms providing investments and sometimes business guidance and other resources to a new enterprise. One good example of how this is working on the cleantech front has been Vivint Solar’s successful IPO in 2014 that was led by major investment firm Blackstone Group. Another funding source worth following is Cleantech Group’s i3 program, where firms like GM Ventures match up with the right startup companies.

Green Bonds
Toyota’s Asset-Backed Green Bond, a $1.75 billion fund announced in March 2014, is part of a much larger global financial trend in green bonds. Funds used to finance bonds that are friendly to the environment are gaining popularity worldwide, according to Christopher Flensborg of SEB, a Swedish bank. Toyota Financial Services’ (TFS) $1.75 billion was upsized from $1.25 billion as institutional investors have expressed interest in this clean transportation investment opportunity. TFS will use the proceeds from Green Bond toward the purchase of retail finance contracts and lease contracts for Toyota and Lexus vehicles that meet high green standards. Overall, green bonds accounted for about $12 billion in funding last year.

Crowdfunding
“Crowdfunding” has become a capital source that’s taken off in the past few years, but it’s riddled with more automotive failure stories than success – as Autoblog Green regularly documents. If done the right way, crowdfunding can be an excellent way to raise seed capital. What initially started out as a simple way to make donations to causes and startups through social media communities has evolved into a mechanism for investor returns. Indiegogo and Kickstarter are the two major crowdfunding sites out there; Indiegogo is more focused on arts and entertainment such as movie projects. Kickstarter is more focused on advanced technology startups. Investors are tracking what will come of a ruling by the Securities and Exchange Commission (SEC) on the JOBS Act of 2012. The JOBS Act will probably ease federal regulations and allow start-ups to raise seed capital from a large number of individual investors up to a limit of $1 million. The SEC won’t be finalizing its crowdfunding rules until October 2015; these rules usually take up to 60 days to be published, meaning that the JOBS Act won’t really be in effect until early 2016. Regardless of that delay, crowdfunding has been booming in the past couple of years as a capital source for startups and major companies.

For startup companies and major players creating clean transportation subsidiaries, there are two investment sources that are likely to be viable this year and beyond: crowdfunding and government programs. My firm, LeSage Consulting, is now offering services to assist clean transportation stakeholders in finding needed investments………..…..

When you become active in crowdfunding projects, you’ll notice that it’s not just startups who use Kickstarter and Indiegogo, or other relevant sites for cleantech such as Fundly, GoFundMe, Rockethub, Greenfunder, or Green Fundraising. Large companies are using crowdfunding to see if their projects in the R&D stage are gaining interest and support. Private equity firms also are active in crowdfunding sites to gauge where new technologies are heading in the marketplace; being active on Kickstarter and other crowdfunding can provide a meeting ground for institutional investors and corporations to move new technologies forward.

Most crowdfunding is targeted at small, startup technology launches that are receiving donations from an enthusiastic community who want to see that new company thrive. For larger companies and investors, there’s occasionally another business model utilized on crowdfunding sites – such as a board of advisors who’ve contributed $10,000 or more and participate in user-interface meetings. They’re not the same as shareholders attending a publicly traded corporation’s annual meeting, but they do contribute more input than individual donors on crowdfunding projects.

The cleantech community is very interested in crowdfunding, and has witnessed a few success stories. Solar Roadways provides an excellent “how to” on making crowdfunding work. The company makes modular panels that replace asphalt, generate energy, and save money on road maintenance. Its first round of funding – about $850,000 – came through the US Federal Highway Administration for research and development in 2009; and through winning GE’s first Ecomagination award in 2010. Lately, Solar Roadways has doubled its initial Indiegogo campaign – more than $2 million has been raised so far, with some of that interest supported last year by its entertaining Youtube video, “Solar Freakin Roadways.”

You may have an electric truck perfect for urban deliveries; a mobile device application that guides drivers to alternative fueling and charging stations; a propane dispenser ideal for fleets; a carsharing program ready to enter a dozen new markets; or a need for seed capital on an advanced vehicle technology R&D project (such as a NextGen lithium battery) so that it gain investment capital for its next phase. Keep in mind that LeSage Consulting can work closely with you on lining up funding to take it to the next level.

Government loan guarantees are seeing positive returns lately, even in the wake of the Solyndra scandal – the California-based solar company that went bankrupt and led to Congressional hearings on the Obama administration backing risky ventures. One clear example of government grants and low-interest loans coming back comes from the US Dept. of Energy investing in the world’s largest cellulosic refinery that opened up last fall in Hugoton, Kansas. Spain-based Abegona has built this refinery capable of producing up to 25 million gallons of cellulosic ethanol using non-edible waste. About $132 million of that plant’s $500 million was backed by the federal loan-guarantee program.

Government grants and loan guarantees (and incentive programs available to fleets through alternative fuel associations), along with crowdfunding, make the most sense these days. They can open the door later on for larger capital investments such as IPOs and venture capital partners. As we’ve clearly seen since 2008, cleantech and clean transportation are tough markets to enter, survive, and thrive within. Finding the right support and resources makes all the difference in the world. (For more information, please contact me at jlesage@jonlesage.com.)