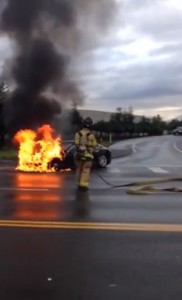 The National Highway Traffic Safety Administration (NHTSA) has ended its four-month investigation into three battery pack fires in the Tesla Model S that occurred last fall. That decision followed Tesla Motors adding a titanium underbody shield to protect the luxury electric car from road debris that can cause battery fires. Tesla CEO Elon Musk announced in an article on Medium.com that all Model S vehicles built after March 6 will have the new shield. Owners of the Model S built before that date can have the titanium shield added by Tesla. NHTSA said that the shield, along with the software upgrade a few months ago that lifted the car’s ride height, have alleviated the agency’s safety concerns with the Model S. Last fall, Tesla’s software upgrade added the ability to raise ground clearance at highway speeds; at that time, Tesla also took steps to prevent overheating of its charging systems, including giving customers upgraded wall adapters and providing charging-software upgrades.