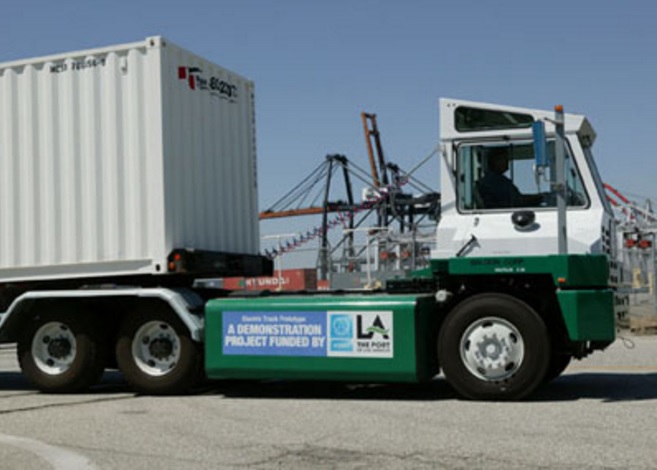 There’s a lot happening right now as the largest port in the U.S. moves farther toward clean transportation.

Earlier this month at ACT Expo, the California Natural Gas Vehicle Coalition (CNGVC) announced submission of the Advanced Clean Trucks (ACT) Now Plan to the ports of Los Angeles and Long Beach. The coalition is giving input as the ports adopt the 2017 Clean Air Action Plan (CAAP), the next phase of the clean truck program. They want to see emissions further reduced from the 13,000 heavy-duty trucks that currently serve the ports.

The ACT Now Plan encompasses all zero- and near-zero emission technologies and fuels, including natural gas, propane, battery electric, hydrogen fuel cell electric, and others that meet a 0.02 g/bhp-hrNOx standard and can achieve a minimum 40% reduction of greenhouse gas (GHG) emissions using renewable fuels or energy.

For now, port commissioners are showing more interest in electrified transportation in hitting emissions targets. While that would more than meet these emission reduction targets, it will take several years for the heavy-duty electric trucks to become available at that scale. Renewable natural gas could serve as an ideal bridge fuel during that time, according to members of the coalition.

Both of the ports are reviewing the ACT Now Plan as part of the process, with more expected to be decided upon this summer. You can read the announcement here, find a summary here, and the see the plan here.

For those interested in learning more about the port’s clean truck program and the role ACT Now Plan will play, attending the upcoming FuturePorts 2017 Annual Conference would be ideal. Conference speakers will be looking at the 10-year mark since the Clean Air Action Plan was implemented at the ports; and some of them have been involved in bringing clean trucks to the ports. The conference “will focus on the trends in energy, port operations and efficiency that are disrupting historical business models and setting the course for a competitive future.” It’s taking place Thursday, June 22, 2017, 8:00 a.m. to 3:00 p.m. at the Hyatt Regency Long Beach.