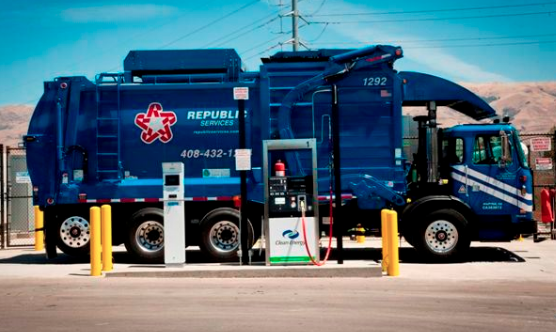 Inc., and other refuse companies, in showing the leadership role these companies can make in clean transportation, renewable fuels, and waste-to-energy projects.

Fleets with refuse trucks are among the largest private fleets in the country; bringing in natural gas makes a real difference in reducing carbon emissions and fuel costs. In Fleet Owner’s Top 500 Top Private Fleets (which tracks heavy-duty vehicles), refuse fleets (under the “Sanitation” category) make up three of the top 10 largest fleets, with Waste Management, Inc., at No. 4 and Republic Services at No. 8. Waste Connections & Operating Co., No. 9, is not running NGVs. The refuse company uses fuel efficient vehicles and is deploying energy conserving practices.

In Fleet Owner’s top 500 private fleet rankings, as of April 2019 there were 18,652 total vehicles in Republic Service’s fleet — 148 tractors, 18,504 trucks, and 947 trailers. In the company’s 2018 annual report, it was reported that 20 percent of its fleet operated on natural gas — which could theoretically put that number out to about 3,600 trucks running on compressed natural gas (CNG) and some of these NGVs on renewable natural gas (RNG). However, the latest data from the company states that the number of CNG-powered trucks would be somewhere between 2,200 and 3,100 or more units (with 3,100 running on “alternative fuels”). The Phoenix-based company’s fleet is spread out over 41 states.

The annual report said that in California, the vast majority of Republic’s fleet runs on natural gas — with more than 90 percent utilizing renewable natural gas (RNG). RNG has the lowest carbon intensity of all commercially available fuels, according to the company. Overall, using CNG provides the company with a competitive advantage in communities with strict clean emissions standards and initiatives.

The company’s fleet is making a gradual conversion over to natural gas and that will continue. In 2018, about 13 percent of the replacement vehicle purchases were CNG vehicles. By the end of 2018, the company operated 37 CNG fueling stations.

Waste Management, Inc., has been carrying the lead — and playing a very visible role — in sustainable fleet operations for the refuse industry. The company also belongs to California Natural Gas Vehicle Coalition and other organizations. NGVAmerica’s board of directors includes Marty Tufte, Waste Management’s corporate fleet director; and the company has been a major sponsor at NGVAmerica’s annual meeting and industry summit.

Its landfill-gas-to-fuel plants convert landfill gas into RNG that can be used in its vehicles in the form of CNG or liquefied natural gas (LNG). It achieves the end goals of lowering fuel costs and reducing GHG emissions more than 80 percent compared to vehicles powered by diesel. As for converting over from diesel refuse trucks, the company reported it had 855 million diesel gallons displaced over the useful life of existing NGVs.

US Dept. of Energy’s Alternative Fuels Data Center reports that natural gas powers more than 175,000 vehicles in the US and roughly 23 million vehicles worldwide. The advantages of natural gas as a transportation fuel include its domestic availability, widespread distribution infrastructure, fuel cost savings, and reduced greenhouse gas emissions over conventional gasoline and diesel fuels.

The cost of converting trucks over to NGVs or replacing diesel-powered trucks with new refuse trucks running on natural gas, and the cost of installing enough natural gas dispensers to keep these fleet vehicles fueled, has always been a hard sell for fleets seeking funding and support. Conventional diesel-powered refuse trucks can start at about $250,000, with pricing being reduced through fleet purchase incentives. Incremental costs for converting these vehicles over to CNG-powered could be about $40,000 per vehicle, according to a study; and that figure will vary based on government incentives offsetting that price. A new NGV can cost a fleet up to about 50 percent more than the cost of a conventional diesel-powered refuse truck, and that could be much less depending on available incentives. Natural gas fueling stations can range from $10,000 for a smaller fueling unit up to $1.8 million to build a new fuel station with several fuel pumps.

Fleets included in NGV studies are usually reaching operating cost savings in two-to-three years from these clean-fuel vehicles. Much of that comes from the stable, consistent price of natural gas compared to the higher and more volatile pricing for diesel. Diesel has been averaging a bit over $3 per gallon in the US lately, with the equivalent price per gallon for CNG at around $2.25. That gap can be widened by state and local programs bringing fleet fuel costs down for CNG, LNG, and RNG.

NGVAmerica said that there are currently more than 17,000 natural gas refuse and recycling trucks operating across the US, and about 60 percent of new collection trucks on order are powered by natural gas. Clean Energy Fuels reported that beyond Waste Management and Republic, Progressive (in Canada and the US) and Emterra (in Canada) have been bringing NGVs into their fleets for years.

The City of New York’s Department of Sanitation runs the largest municipal refuse fleet in the US, and decided to switch over to NGVs several years ago. That took place when the city of New York seriously took on its air pollution issue.

In October, Republic Services announced it will operate an additional 156 CNG-powered solid waste collection trucks serving customers throughout the country by the end of 2019, bringing the total number of vehicles running on alternative fuels to more than 3,100. It’s fleet is saving about 26 million gallons of diesel fuel annually.

Earlier this year, the company announced that it will utilize increasing amounts of Clean Energy Fuel’s Redeem RNG fuel across 21 states over the next five years. This is projected to reduce fleet emissions by roughly 250,000 metric tons of CO2e (carbon dioxide equivalent) per year.

In its 2018 annual report, Republic said that during that year, new landfill gas-to-energy projects came online, increasing the production of energy used to power homes, businesses and, in some cases, the company’s own vehicles.

Republic’s 2018 sustainability report said that the company’s fleet emissions had been reduced by three percent through the use of CNG and RNG. Things are looking up on the emissions and safety fronts, according to the report: “Our recycling and waste collection trucks are complex, high performance machines designed to be safe, comfortable and efficient. As we retire and replace older trucks, we are able to take advantage of advancements in alternative fuels in addition to safety technology and other modern efficiencies.”

This year in July, Republic expanded its sustainability goals over the next decade in Blue Planet: 2030 Goals. Along with working toward zero employee fatalities and reducing workplace injuries, two of the other corporate objectives will be to reduce absolute Scope 1 and 2 greenhouse gas emissions 35 percent by 2030; and cultivate regenerative landfills that will increase biogas sent to beneficial reuse by 50 percent by that same year.

And in other news……..
Uber sexual-assault incidents:  Ride-hailing giant Uber just released its first-ever report featuring staggering statistics on sexual assaults and homicides involving Uber drivers and passengers. During 2017 and 2018, more than 3,000 people were sexually assaulted during Uber rides. About 42 percent of those reporting sexual assaults were drivers, and the most severe incidents were put upon passengers; 92 percent of people who experienced sexual assault involving penetration were passengers, according to reports. Women and female-identifying survivors made up 89 percent of the sexual-assault survivors. During 2017 and 2018, there were 19 fatal physical assaults occurring in a total of 18 incidents in relation to Uber; 8 were riders; 7 were drivers using the Uber app; and 4 were third parties (such as bystanders outside the vehicles).

Lyft also faces accountability for several sexual assault incidents committed during rides. These crises show the level of inadequacy in driver background checks, and the ability of non-Uber driers to manipulate the app and take rides. Some have been able to hide their identities when using the Uber app. The strict standards applied to other transportation industries will inevitably make it over to the ride-hailing apps.

Fleet EV study:  Find out what fleets think about bringing electric vehicles into their vehicle selector lists from a new study by consulting firm Mortenson. The adoption of zero and near-zero emission vehicles in public and private fleets is growing. The rapid change is causing fleet owners, policymakers, and public infrastructure experts to examine what clean technology means for them. Over 200 professionals were interviewed at the 2019 ACT Expo.

And a few more news briefs………