Battle over South Korean battery tech:  LG Chem and SK Innovation are each asking the US International Trade Commission to bar the other South Korean electronics company from supplying batteries to Volkswagen, GM, Ford, Jaguar, Audi, and Kia. The stakes are quite high, with one analyst predicting that country’s electric vehicle battery market will grow 23 percent a year to reach $167 billion in sales by 2025. 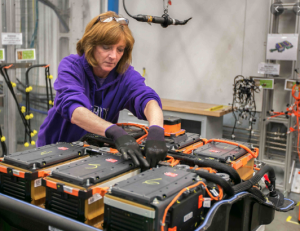 In America, the battle ensued when LG Chem filed a claim that SK Innovation won the Volkswagen contract fraudulently by receiving trade secrets supplied by ex-LG Chem employees who’d taken jobs with the smaller competitor. SK Innovation had won a contract to build batteries for VW’s ambitious EV product launch campaign, at the automaker’s factories in Germany and in Chattanooga. SKI also was able to start work on a new battery factory in Georgia, about 150 miles from Chattanooga, and another in Hungary. The trade commission is expected to make a preliminary ruling in June and issue a final decision next October.

Tesla, Uber & Amazon — The Gig Economy meets the Gilded Age:  What do Tesla, Uber, Amazon, Lyft, Instacart, and DoorDash have in common? They’re great to buy from, but you probably wouldn’t want to work for them as an independent contractor or employee.

We love the perks — Tesla’s fun-to-drive electric cars, belonging to Amazon Prime, cheap fare Uber and Lyft rides, having the annoyances of grocery shopping taken away by Instacart, and tapping into other efficient, affordable gig economy services. But we usually don’t like working for them — just ask around and search the internet.

Case in point:  An engineer working for Elon Musk’s SpaceX intergalactic travel company told me about the intensely demanding, stressful long hours he has to work. While Musk is still an icon for him as a pioneer in space flights and electric cars, he doesn’t see himself able to live that way for very long. As we’ve heard about from executives leaving Tesla, Musk expects employees to give their lives to the cause.

Another one: A woman working for Amazon told me about attempting to be reclassified from a part-time employee to full-time employee with benefits. She and her Amazon co-workers are expected to work extra hours and take on extra duties. But she’d received a company letter detailing, once again, why she didn’t make it to full-time status with medical coverage and other benefits. Like working for other prominent, well publicized tech employers, what at first seemed like a wonderful career opportunity can go upside down.

For independent contractors working for Uber and the big wave of mobile app-based startups since then, the initial motivating factors behind doing this kind of work have been waning for the past two years.

A few key developments have been taking shape. (See my blog for more………)

And in other news:
Chaotic trade climate:  President Donald Trump said a trade agreement with China might have to wait until after the US presidential election in November 2020, tarnishing hopes that their trade war would go away and its chaotic impact on trade deals and the economic climate. “I have no deadline, no,” Trump told reporters in London, where he was due to attend a meeting of NATO leaders. “In some ways, I like the idea of waiting until after the election for the China deal. But they want to make a deal now, and we’ll see whether or not the deal’s going to be right; it’s got to be right.”

Yesterday, Trump said he would hit Brazil and Argentina with trade tariffs for “massive devaluation of their currencies.” That was followed by a US threat to slap duties of up to 100 percent on French goods, from champagne to handbags, because of a digital services tax that the Trump administration says harms U.S. tech companies.

Turbulence in Hong Kong from the uprising that’s being suppressed by Chinese military has also been part of the upheaval. Automaker stocks seem to be underperforming lately over concerns that China could retaliate over U.S. legislation in support of the protesters in Hong Kong. “The legislation’s passage carries unfortunate timing for the US auto brands, which are also coping with 16 straight months of declining China auto sales,” notes Bloomberg Intelligence analyst Steve Mann.

Will 5G be here soon?:  For those wondering when 5G will be here to take our smart phones and cars to the next level, T-Mobile says it will be the first carrier to offer a nationwide network starting Friday. There are a few caveats, though. It will be using T-Mobile’s 600MHz spectrum that taps into airwaves like the ones used for 4G LTE and bundles them together to deliver faster speeds — offering “low-band” 5G. The company says it will be a precursor to a more robust network that will be made possible with the combination of Sprint’s vast airwave holdings — which made Sprint a direct competitor to AT&T and Verizon Wireless years ago. However, T-Mobile’s acquisition of Sprint still has to complete legal hurdles. The US Justice Department and Federal Communications Commission gave the merger the green light; but, it faces a lawsuit from several state attorney general, and that trial will start Dec. 9. T-Mobile is promoting the 5G launch with special prices on a new OnePlus phone and one from Samsung. The launch of 5G has been a very hot topic for those attending AutoMobility LA and CES in Las Vegas next month. It will have a lot to do with self-driving cars making it to the next level through its use of C-V2X, a communications technology using the same 5G networks coming to our phones. It will allow vehicles to communicate with each other, with traffic signals and with other roadside gear. It’s a key element of making cars safer, diverting traffic jams, and other benefits.

Reserving a Fisker Ocean:  Interested in getting one of the first Fisker Oceans to roll off the assembly line? Put down a $250 down payment by using this iPhone app, called Fisker Flexee. Coming in early 2022, the Fisker Ocean will be “the world’s most sustainable vehicle.”

Musk sued for “pedo guy” insult:  Tesla CEO Elon Musk will go on trial in a defamation lawsuit in Los Angeles federal court starting today based on his infamous Twitter post calling a British cave explorer a “pedo guy.” The jury will decide whether Musk committed a negligent act aimed at Vernon Unsworth, who helped rescue a group of boys trapped in a network of caves in Thailand in July 2018. Musk did apologize and deleted the post, but Unsworth sued Musk for damages, claiming his reputation was damaged by being baselessly branded as a pedophile. Musk plans to testify in how own defense for a trial expected to run about five days. Back in July 2018, Musk fired off a round of irate tweets after Unsworth criticized the Tesla and SpaceX CEO’s offer to help with the rescue mission by sending a mini-submarine built by SpaceX. Musk has said in court documents that “pedo guy” was a common insult “synonymous with ‘creepy old man’” when he grew up in South Africa.