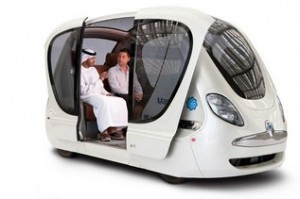 Abu Dhabi is home to the world’s fifth largest proven oil reserves and the sixth largest natural gas reserves. It’s also the home of what many consider to be the most significant renewable energy experiment in the world with its Masdar project. The Abu Dhabi government is investing $15 billion in Masdar’s university and its role as a renewable energy developer, investment arm, and cleantech center. Later this month, it will be hosting the seventh annual World Future Energy Summit; the summit promotes innovation, global collaboration and investment opportunities in renewable energy and clean technology.

The United Arab Emirates (UAR) and its capital city, Abu Dhabi, sit on the Persian Gulf next to neighbors Oman and Saudi Arabia. The Emirate of Abu Dhabi has enough hydrocarbon reserves to last beyond 100 years. Through Masdar (also called Masdar City), Abu Dhabi seeks to send the message that it’s a responsible oil producer that can help create a balance between hydrocarbons and renewable energy in addressing both climate change and energy security. While UAR is a member of OPEC, Masdar seems to be an attempt to break out of the assumptions made about the Middle East in other parts of the world; one of them being that oil completely dominates its politics and economics.

Masdar is a strategic government initiative – and a subsidiary of the UAR’s Mubadala Development Company – that was started up in 2006. Masdar will highlight its new solar and wind projects in the UAE, United Kingdom, Seychelles, and Mauritania at the World Future Energy Summit later this month. The company said it has installed more than 750 megawatts of renewable grid capacity in the past year. Along with other partners, Masdar has run the world’s largest off-shore wind farm, the world’s largest concentrated solar power plant, Africa’s largest solar PV plant, and has brought utility scale renewables to the Seychelles.

Masdar runs three integrated business units complemented by a graduate-level research university with the Massachusetts Institute of Technology (MIT). The MIT and Masdar Institute Cooperative Program is an ongoing collaborative program with Abu Dhabi to provide advice and guidance in the establishment of a graduate research university focused on alternative energy, sustainability, and advanced technology.

Transportation in Masdar takes place on foot or through electric vehicles (EVs). Personal Rapid Transit EVs are available at a parking station at the university. The four-passenger driverless pod vehicles are guided by a computer that charts direction tied into tiny magnets embedded in the road.

Masdar City is hosting the Middle East’s first fast charging EV station in collaboration with Mitsubishi Heavy Industries Ltd. The pilot project uses the CHAdeMO-certified Rapid Charger and aims to assess how efficiently the rapid charger technology will function in the region’s harsh climatic conditions. It offers an 80% charge in 30 minutes.

An EV pilot project launched was launched in mid-January 2011 and runs a fleet of 12 Mitsubishi i-MiEV electric cars. The test project has worked on addressing users’ concerns on battery life and dealing with skepticism about the EVs’ inability to withstand desert heat. They’re the first battery electric vehicles deployed into the UAE.