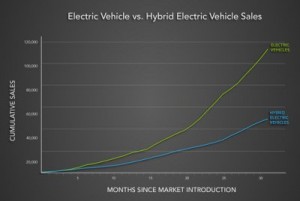 While reviewing the state of the US auto industry in new vehicle sales, it’s easy to get depressed about the condition of electric, hybrid, and alternative fuel vehicles. Hybrids and EVs were a little bit over 4% of about 1.3 million new vehicles sold in the US market in July. Sales and of new and converted natural gas vehicles, propane autogas, hydrogen fuel cell, and biodiesel vehicles ran in small numbers (maybe 0.5% of the total). Tracking flex fuel/E85 numbers are not worthwhile since the adoption rate for fueling them on E85 ethanol runs pretty low. The grand vision commonly expressed by government officials and advocacy groups of green/alternative fuel vehicles making up 50% of new vehicle sales by 2050 seems insurmountable at times.

But it’s good to keep things in perspective. Energy & Capital put out one of its usual snarky stock market analyst pieces on plug-in electric vehicles; yet managing editor Jeff Siegel did have some fairly positive things to say about their potential. Federal and state tax credits play into it and will be around for a few more years.

He makes the point that EV sales are impressive so far compared to hybrid sales in their early phase. Approaching 25 months on the market, EVs are hitting the 110,000 total new vehicles sold so far. At that same period of 25 months after market introduction, hybrids were only at about 50,000 units sold. So after another 10 years, EVs should be making up a larger percent of total sales. Hybrids are at about 3.5% of new vehicle sales and EVs could be around 5% to 6% of total sales in about 10 years at its growth current rate. Both numbers are expected by several analysts to be wider going forward. Maybe they’ll both be about 10% of new vehicle sales by 2025 reaching 20%? It’s all possible and other segments could be part of it, such as hydrogen fuel cell vehicles. Maybe other advanced fuels and technologies will take hold and see some substantial numbers as well.

Making it to 50% of all new vehicle sales would make for a massive transition. It could be that looking at the numbers will have to change. What if the US and other major markets hit their targets for highly fuel efficient vehicles (or somewhere near the mark – 45 miles per gallon may not be 54.5 mpg but its way better than 24 mpg). If green/AFV numbers made up to 25% of new vehicles sold and internal combustion engines were reaching 40+ mpg, it would be a much better environment.