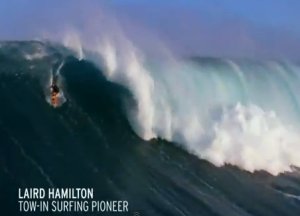 Have you seen Mazda’s TV commercial with monster waves being surfed by legend and tow-in surfing pioneer Laird Hamilton? Mazda makes the bodacious claim that its Mazda3 with SkyActiv technology is on the same level. The ad pitches the 40 highway mpg EPA estimate, that it was named a top safety pick by Insurance Institute for Highway Safety, and that it starts at $16,700. “This is the Mazda way, and this is the Mazda3. What do you drive?”

Mazda has yet to offer any plug-in, hybrid, or alternative fuel vehicles – so its SkyActiv technology is its best bet for meeting federal fuel economy and emissions standards – and for upping its green credentials. Mazda says that the smartness of SkyActiv boils down to highly fuel efficient engines with great compression ratio; ideal transmissions; reduced vehicle weight; safety performance; and a clean diesel version. While Mazda’s sales were slow in the first third of 2013, Mazda credits SkyActiv for starting to pick up the numbers again for its all-new 2014 Mazda6 and versions of the Mazda3 and CX-5 utility vehicle. It’s too early to tell if SkyActiv is making much of a difference; those models were already doing well in their vehicle categories, but sales have picked up for the automaker and SkyActiv is the main focus of its marketing campaign.

Ford offering CNG and propane powered F-150s
Compressed natural gas (CNG) and liquefied petroleum gas (LPG) nearly have nothing to do with retail light duty passenger vehicles, with the exception of the Honda Civic Natural Gas Vehicle (which has only been sold in very small numbers to retail buyers so far). Now, when it comes to fleets, natural gas and propane autogas-powered trucks are a very big deal. Ford Motor Co. is adding to alternative fuel vehicle offerings with CNG and LPG options for the 2014 F-150 pickup truck. Ford will become the first automaker this fall to offer both a CNG and propane autogas version of a half-ton pickup. Ford expects to sell about 15,000 CNG-LPG vehicles this year. Chrysler and General Motors are offering bi-fuel trucks that can be powered by either CNG or gasoline. Fleets like the alternative fuel trucks for the cost per mile – about a third of gasoline and diesel and reduced emissions compared to conventional trucks. The challenge has been seeing enough product offerings on the market and a refueling infrastructure outside the fleet’s home base. Ford’s announcement is good news for advocates of the alternative fuel and technology.

On the subject of CNGs, Nissan is bringing a CNG pickup truck to the Thailand market. There are expectations that alternative fuel vehicles will be seeing an increase in Asian markets, especially through government-funded projects aimed at reducing air pollutions and vulnerability to fuel price volatility. The Nissan Navara CNG is the company’s first bi-fuel CNG-gasoline engine. It’s powered by an engine that generates 154 horsepower at 5,200 rpm. The new Navara CNG will reduce running costs by two thirds compared to a conventional gasoline engine, Nissan said.

Hey gang, haven’t signed up for the free Green Auto Market Newsletter yet?
I’ve added a subscription link on the homepage in the past week, asking for first and last name and email address (see column on right-hand side). I encourage you to sign up and share it with colleagues interested in the business of green cars, fuels, and technologies. Thanks!

Via Motors and PG&E roll out emergency power storage in plug-in hybrid trucks
Hurricane Sandy raised hackles for locals living in places like New Jersey last year. Power outages wreaked havoc for residents and employers in ways that tend to get forgotten about until the electricity disappears. Plug-in hybrid truck maker Via Motors has been working on a “power export” offering with Pacific Gas & Electric. The Via pickups can be hooked up to supply electricity for urgent situations, such as a home or medical facility that needs electricity to respond to an emergency. The two companies are working on a Via Motors VTRUX, a range-extended truck with a 300 kilowatt traction motor, 150 kW generator, and 4.3L, V6 engine. It’s able to power 120V and 240V power outlets, which can power tools and export electricity as needed.

Apple competing for share in the connected car space
Connected cars and telematics are a competitive battleground for third parties like Microsoft and Pandora Media, and now Apple is competing for space. By the end of this year, car shoppers will be seeing several vehicles with Apple’s iPhone functions that use Siri voice controls for navigation, texting, emails, and music. It takes a lot of testing and hard work to make these technologies work the right way in cars – and suppliers typically fail to deliver it, according to the Car Lab consulting firm. Automakers know many consumers already use their iPhones as a substitute for built-in navigation systems. The trick for automakers is figuring out a good way to pair the iPhone to their cars in a way that avoids driver distraction and increases user satisfaction. The Chevrolet Spark and Sonic small cars offer Siri, but it hasn’t done well so far in reviews. So Apple has a big challenge ahead, and it will get a lot of attention from connected car analysts.