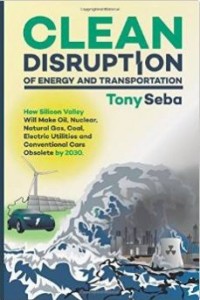 As covered last week, AltCar Expo keynote speaker Tony Seba made some outrageous statements about the future of transportation technology and economics. The Silicon Valley entrepreneur and Stanford University lecturer inspired humorous comments from panel speakers, and interesting conversations for attendees who had just heard him speak – inspiring for those supporting electrified transportation and solar power and ominous for those making their living in automotive, transportation, and other industries.  A question that stuck in my mind: What will Ford Motor Co., Hertz, Mack Trucks, Manheim, and mega-dealers be selling 25 years from now?

The statistics and market analysis presented by Seba were fascinating. They came from his recently published book, Clean Disruption of Energy and Transportation: How Silicon Valley Will Make Oil, Nuclear, Natural Gas, Coal, Electric Utilities and Conventional Cars Obsolete by 2030. Here are a few points he made……

Seba may be way too off the mark on several of his conclusions, but he’s right about one thing:  technology and economics are going through a historic shift right now. The role of automakers and transportation companies is changing – which is why we’re seeing automakers startup car sharing services and test out self-driving cars. It’s also a driving force behind nearly every automaker rolling out an EV and other alternative fuel vehicles.

Clean transportation has a very important role to play. It’s providing a channel for advanced vehicle technologies, reducing emissions and fuel consumption, and supporting economic advancement and job creation in a fast-changing world. Maybe you’ll get laid off by an automaker and go to work for a specialty EV maker, or lithium battery maker, or alternative fuel infrastructure supplier, or an advanced engineering and design firm. That sounds much better than taking drive-through orders at McDonalds. As my grandfather used to say, “Always be looking for another job.”

One thought on “Disruptive technology: What will we be doing to make a living in 25 years?”