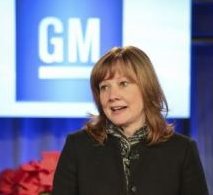 Changing of the guard is starting to happen in Motor City. Right after General Motors paid off the federal government for its post-bankruptcy bailout loan, CEO Dan Akerson announced he’s leaving his job and that GM is getting its first female CEO, Mary Barra. She’s previously served as senior vice president of global product development and has championed GM’s leadership role in electrified and fuel efficient vehicles. Ford Motor Co. is also flooded with gossip about its shining star CEO Allan Mulally leaving and going back to Washington to captain the Microsoft ship. As for Barra, ex-Chevy Volt guru and former GM vice chairman Bob Lutz had his usual bit of banter to share. On a Detroit radio talk show last week, Lutz praised Barra for leading GM’s product development and had something very Lutz-like to say: “I don’t know if you know what she looks like, but she is medium height with an attractive, athletic build, nice face — she’s not a little old lady with glasses; she is very athletic looking, very active and it’s easy to imagine her behind the wheel of a car.” So, she may not be a car guy, but she’s alright with Bob Lutz.

And in other clean transportation news…..