How accurate and truthful are automakers and EPA being about mileage ratings? 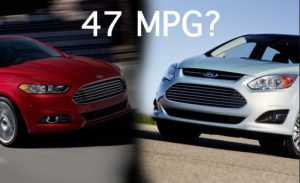 Fallout from the fuel economy ratings on the Ford C-Max hybrid has caused the US Environmental Protection Agency to rethink how it calculates mileage. The EPA window sticker mileage rating labels go back to the 1970s, and disparities have widened as more hybrid and electric vehicle models have come to market. Consumer Reports and analysts are taking automakers to task for fudging on fuel economy numbers as OEMs push for fuel economy improvements to comply with strict federal standards.

EPA says it will work with consumer and environmental groups and automakers to propose revised fuel-economy testing regulations. It’s understood that the ratings need to be reliable. Ford has changed the combined rating on its C-Max from 47 mpg to 43. Ford is also offering C-Max owners reimbursement cash payments for additional fuel consumption. Consumer Reports is still staying on top of the controversy and just released a chart showing its own mileage testing data versus what the EPA lists for 14 vehicles. EPA test results showed them that the agency used a mathematical derivation formula in lieu of an actual test. EPA doesn’t publish the formula that it uses, but it is using the formula for EPA mileage ratings on more than 80% of all cars.

Automakers given kudos for sustainability initiatives at US plants
Ford Motor Co. and General Motors have been recognized for making manufacturing plants more energy efficient, reducing landfill and water consumption, and powering plants with renewables. Competitors have been getting the nod lately, as well, for changes being implemented at US plants. Honda is working on a test track facility using 70,000 solar panels and selling the excess renewable energy. Subaru has installed a zero-landfill, 100% recycling policy at its Lafayette, Ind., plant. In Chattanooga, Tenn., Volkswagen opened a 9.5 MW solar park with 33,600 solar modules capable of producing 13.1 gigawatt hours per year of electricity. Toyota prides itself for having the most clean energy patents in one year – with 207 being filed in 2012. Honda is taking the lead this year on clean energy patents and registered 87 patents in 2012.

EPA ranks five greenest, most fuel efficient cars of the year
Green Car Reports made a list of the five greenest cars on the market, based on fuel economy measurements issued by the US Environmental Protection Agency. As you’ve just read about previously in this newsletter, the EPA’s ratings have been questionable lately. However, it is good to get a look at how the miles per gallon equivalent rating is being reported and what are now to be considered the top cars for fuel efficient vehicles. (You’ll also notice that the Toyota Prius is no longer in the top five, and it topped this list for years.)

Renewable natural gas adopted by Washington bus fleet
Renewable natural gas just took a step forward. Pierce County, Washington, (covering Tacoma and Olympia) has been converting its transit bus fleet over from compressed natural gas to renewable natural gas. Pierce Transit gained EPA approval to fuel its bus fleet with RNG – 143 of its 155 buses are now being powered by RNG made from the biogases from the Cedar Hills Landfill in nearby King County. It’s the first municipal transit fleet in the country to utilize this alternative fuel, and probably one of the first large organizations to bring in RNG.

Ecotality hitting the wall and may go bankrupt
Another company in the EV supply chain may be heading for bankruptcy – Ecotality. The DOE has put Ecotality’s request for more federal funding on hold after the charging station supplier company stated that it’s having trouble getting financing and may have to declare bankruptcy. Ecotality outlined its problems in its latest SEC 8-K filing. Ecotality has been depending on the DOE funds — $100 million had come through, nearly all of which has gone into the federal EV Project.