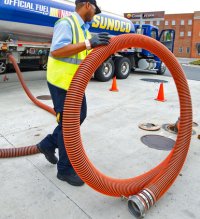 The US Environmental Protection Agency (EPA) yesterday finalized what it calls “Tier 3 standards” requiring gasoline sulfur levels to be reduced by two thirds from 30 parts per million (ppm) to 10 ppm. EPA says that its new emission standards for cars and gasoline will significantly reduce harmful pollution and prevent thousands of premature deaths and illnesses, while also enabling efficiency improvements in the cars and trucks. Smog emissions, including nitrogen oxides and volatile organic compounds, are expected to drop 80% compared to today’s vehicles and particulate matter (soot) will drop by 70%. These standards will begin being implemented in model year 2017. The Tier 3 standards are being supported by automakers, labor, consumers, and public health advocates. Once fully in place, the standards will help avoid up to 2,000 premature deaths per year and 50,000 cases of respiratory ailments in children, according to the EPA.