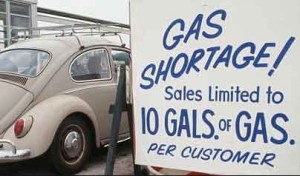 October 17th saw the 40th anniversary of the oil embargo by the Organization of the Petroleum Exporting Countries (OPEC) – a six month embargo that cut the supply of oil to the US and skyrocketed gasoline prices. The days of 25 cents per gallon gasoline were over and the coming years would see desperate attempts to solve the problem. The 1973 embargo started right after the Yom Kippur war was launched, and was spurred by US support for Israel; the second gasoline crisis in 1979, again driving up pump prices and forcing drivers to wait in long lines to fill their tanks, was triggered by another Middle East crisis – the takeover of the US embassy in Iran.

For Keith Crain, editor-in-chief of Automotive News, it was the end of innocence – when automakers had been competing to provide the biggest and best cars to drivers and mileage didn’t really matter at all. The OPEC oil embargo changed all of that; General Motors president Ed Cole vowed to raise the automakers corporate average fuel economy (CAFE) by 50% from 12 mpg to 18 mpg within a decade. The US Congress thought it was very good idea and raised the bar even higher – CAFE was to be 27.5 mpg by the 1985 model year, though that did not happen. For Peter Ward, then with the California Energy Commission, the 1973 oil embargo was the watershed, defining moment illustrating the power of the oil cartel on global economics and clarifying the necessity for alternative fuels.

There were other watershed moments taking place after the initial OPEC embargo….

As then-president George W. Bush said a few years ago during his State of the Union address, “We’re addicted to oil.” Recovery from oil addiction is being played out now in the federal fuel economy standards; growth in plug-in, hybrid and alternative fuel vehicle launches; development of the alternative fuel and charging infrastructure; California’s (and states following California’s guidelines) zero emission vehicle targets; and demand for green, alternative fuel vehicles from consumers, fleets, municipalities and government agencies, and transportation companies. There’s a still a long ways to go, but oil supply disruption and skyrocketing pump prices continue to be a very motivating force.