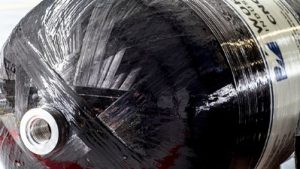 For Worthington Industries, displaying at 2015 ACT Expo was a smart move for announcing new product technologies to fleet operators interested in natural gas and propane autogas vehicles. Wayne Powers, alternative fuels general manager at Worthington Industries, talked to Green Auto Market about what fleets are thinking about alternative fuel vehicles during a time when gasoline and diesel prices stay down; and the experience Worthington Industries has in storage and transporting of compressed natural gas, propane autogas, LNG, and hydrogen, plus lightweight materials used in passenger and commercial vehicles.

Worthington Industries staff also connected with fleets interested in propane autogas vehicles during ACT Expo. Last year, Worthington won approval by American Society of Mechanical Engineers (ASME) of its propane autogas fuel tank designed to avoid wasting cargo space; the steel tanks are at the forefront of leak prevention, Powers said, and Worthington Industries is the only North American company to offer the toroidal tanks that have been popular throughout Europe. Worthington saw the need for the convenient tire-sized tanks in the U.S., and faced the stringent ASME propane autogas fuel tank regulations head-on to earn approval, the company said.

Pump prices for gasoline and diesel have dropped dramatically in the past year. During ACT Expo, Worthington Industries saw both sides of the issue from fleet operators, Power said. Fleets deploying CNG and propane-powered vehicles continue maintaining their interest in vehicle acquisitions, albeit at lower demand than a year ago. Fleets and transit bus operators will continue acquiring the vehicles, tanks, and infrastructures. However, fleets that are new to the technologies say they’ll continue to stay “on the sidelines” for now, Powers said.

Stationary storage and fuel transport delivery also have been strong markets for Worthington in the US and overseas, and that includes hydrogen. Bulk gas transport to industrial gas producers and fueling sites have seen strong demand in the hydrogen market, he said. Powers says it’s been helpful for the company to remain “fuel neutral” and make its storage technologies available for users of hydrogen and other alternative fuels. Liquefied natural gas (LNG) is seeing a lot of interest in the market, especially for LNG transport trailers.

The “lightweighting” trend in vehicle manufacturing, tied to US Environmental Protection Agency fuel economy and emissions mandates, has also paid off for Worthington Industries. The company has been known for several years as a maker of composite cylinders using a wide variety of metals. All of the OEMs have alternative fuel programs; Worthington cylinders reduce overall weight in fuel systems and provide the right tanks for OEMs to meet emissions and safety standards, Powers said.