So there I was sitting in my car on a Saturday afternoon, taking care of something for my parents that I’d put off doing for several years. I was waiting in line to drop off 40-year-old paint cans, spray paint cans, empty lacquer 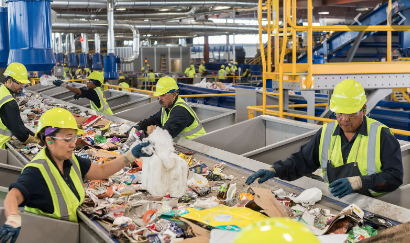 thinner containers, and more paint cans. Some of the paint cans were still partially filled, and most were empty. Either way was fine to drop off, I was told the day before when I called the EDCO Disposal center in Signal Hill, Calif., for more information.

My interest had also been sparked by the Chinese government announcing in July that it would no longer be buying mega-tons of America’s recycling waste. It was described as being a potential fatal blow to the already struggling recycling industry. So what’s going to happen to all of it? Will it be dumped where it shouldn’t be?

Talking to staff at EDCO Disposal, reviewing the facility, and feeling relieved to find an accessible way to be rid of toxins and waste for no fee, motivated me to look into the company; and from there, what the waste collection and recycling industry is dealing with on these critical environmental issues — not to mention its very survival. Environmental groups are concerned about what’s happening in refuse landfills and waste being dumped into rivers, lakes, and oceans, especially during storms. There’s also concern over recycling services being abused by people dumping trash into recycling bins that doesn’t belong there; and what should be accepted as recyclable, such as grocery stores being allowed to provide customers with plastic bags with a recycling symbol of #1 to #7, that may or may not be meeting environmental rules.

“Trash can travel throughout the world’s rivers and oceans, accumulating on beaches and within gyres. This debris harms physical habitats, transports chemical pollutants, threatens aquatic life, and interferes with human uses of river, marine and coastal environments,” according to the US Environmental Protection Agency.

Properly disposing toxic waste has been a challenge for many. Years ago, there might be one Saturday afternoon a month where you had to drop-off your waste that wasn’t allowed to be dumped into trash cans. It might be taking place at a high school’s football field temporarily set up as a disposal site. But it wasn’t at all convenient or clear on how to be ready for it, and what you could include in the drop off. Cities had already started adding recycling bins to their weekly trash pickup services in the 1990s, which did help, but it didn’t resolve the question of dumping toxins and other waste that wasn’t going to be taken to the city dump.

What does EDCO allow to be picked up for recycling? Carton containers, mixed paper, styrofoam, aluminum, shredded paper, glass containers, paperboard, cardboard, and plastics can be dropped off. They do have some restrictions enforced, such as only allowing plastics with a recycling symbol of #1 to #7, and lids to these containers can be included in the drop-off. On the waste disposal side, my local EDCO disposal site allows for carpet, paint, paint cans, cleaners, oils, batteries, medical sharps and medicine, pesticides and fertilizers, electronic products, fluorescent lamps, cathode ray tubes, instruments that contain mercury, and more.

Like some of its large waste management and recycling competitors, the company has adopted a sustainability program, and issues an annual statement on its accomplishments. Its truck fleet consist of over 200 natural gas powered vehicles including collection, transfer, flatbeds and pickup trucks. Renewable natural gas (RNG) started being brought into the fueling stations nearly two years ago; and the company operates public CNG fueling stations in Buena Park, San Marcos, and La Mesa.

EDCO has been able to fill the void of one recycling company, rePlanet, which had to close its 283 recycling locations in Southern California last August after the Chinese government put the last nail in its coffin. EDCO saw a huge increase in redeeming recyclables at several of its locations. Another driver of recycling business has been supermarkets that are required by law to buy back bottles and cans. But the stores don’t like doing it, and the process takes much longer, according to one redeemer.

The company is also tapping into California Senate Bill 1383, which was passed in 2017. That bill aims to reduce the amount of organics in landfills. The company, and several other waste management and recycling companies, saw this coming several years ago. Over the past decade, customers have been asked to help the company build up green waste by dumping material such as tree limbs, grass, and food waste, into green cycling containers. That’s increased its organics collected over 20 percent. With the new state law, EDCO is constructing a new anerobic digestion facility in Escondido, Calif., and it should be operating by early 2021. It can handle up to 500,000 gallons of material. Methane gas comes out form microorganisms breaking down the material, which will create renewable natural gas to power the company’s fleet and for other power uses.

Waste disposal and recycling has been going through a transformation for several years. The US population has been increasing at a quick pace, as have the numbers in several countries around the world. There’s more refuse to dispose of without seeing it dumped into oceans or landfills creating a multitude of problems. Cities around the country had taken on unrealistic projects, such as San Francisco pledging 16 years ago to achieve zero waste by 2020; but the city is nowhere near that goal.

But like vehicle pollution, energy inefficiency, coal-powered plants, and oil drilling, the challenges are high in waste and recycling — but there is hope. As one study describes it, solutions “will be accomplished through the implementation of cutting-edge technology and through an unprecedented level of cooperation and coordination between recyclers, designers, packagers, manufacturers, businesses, municipalities, governments, and others.”

And in other news:
China sees sales plunge:  China new vehicle sales plunged 92 percent during the first two weeks of February as the coronavirus outbreak kept buyers afraid to go out in public and visiting dealer showrooms. The first week was even worse, with a 96 percent plunge in sales, the China Passenger Car Association said in a report. The national government is now considering extending subsidies for electric vehicle purchases beyond this year to revive sales in its “new energy vehicle” sector. Local companies are looking forward to it, such as BYD, BAIC, and startup NIO. Tesla would also like to see it happen as new deliveries starting coming from its Shanghai factory. Sales of these NEVs tumbled 54 percent in January from the year before, along with a shrink in the overall market; and that was largely before the coronavirus outbreak hit, causing city-wide lockdowns and production line halts.

Lucid partners with LG Chem:  Lucid Motors announced a long-term partnership with leading EV battery supplier LG Chem for the Lucid Air electric sedan. The startup said it chose LG Chem because of confidence in its batteries bringing an ideal level of efficiency, and further optimizing Lucid’s goal of meeting or exceeding its targets for range, energy density, and recharge/discharge rates. The company expects it will reach full production this year at its Arizona factory, with LG Chem having an exclusive agreement to provide battery packs for standard versions of the electric car through at least 2023.

NACFE supporting electric trucks for regional hauling:  The North American Council for Freight Efficiency (NACFE) has determined that regional trucking operations are well suited to be early adopters of electric trucks. It is also a rather large segment of the market with sufficient scale to have a big impact on the industry. It study will be focusing a few key topics: identifying high-potential regional trucking routes in concert with changes to freight movement; supporting the implementation of initial and future deployments outside of California; scaling best practices in infrastructure development for fleets and communities; and increasing confidence in the value of electrification. “We are embarking on a three-year project to gain a better understanding of how commercial battery electric vehicles will best fit into the regional haul market, said Mike Roeth, executive director of NACFE.

LA places biggest order for electric buses:  Los Angeles mayor Eric Garcetti announced on Feb. 20 that the Los Angeles Department of Transportation (LADOT) has placed the largest order for electric buses in US history and that 134 of the 155 new buses will come from BYD. It’s part of the city’s goal of having 100 percent of its buses running on electricity by the opening ceremonies of the 2028 Summer Olympics. “The clean transportation revolution is not a distant dream — it’s happening on L.A.’s streets right now,” said Garcetti, who spoke to dozens of LA reporters and city workers after quietly arriving at the Department of Transportation in a 30-foot BYD electric bus.