From a U.S. market perspective, the Nissan Leaf has been taking a dive in sales in the past couple of years. Viewing it by global sales volume provides another perspective.

Automakers take the U.S. market very seriously for launching and marketing a new technology like plug-in electrified vehicles. But it’s not all about the U.S., and some automakers have given other markets more weight in the initial phase of the car. The Mitsubishi Outlander plug-in hybrid has been a leader in Europe and was the fifth top selling PEV globally last year – which has yet to be launched in the U.S. BYD has three of the top selling PEVs in the world and has just started seeking a second EPA certification to start selling it e6 electric vehicle in the U.S. 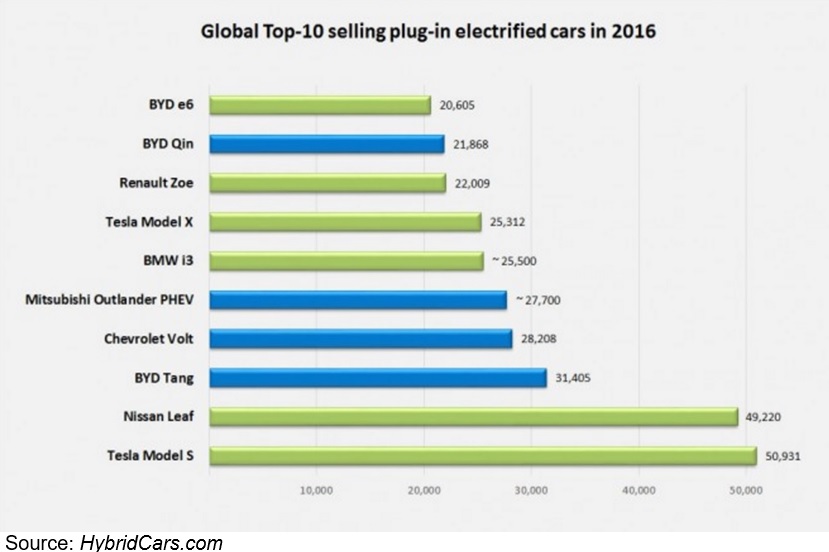 The all-electric BMW i3 did better in Europe than the U.S. last year, with 9,726 units sold in Europe and 7,625 vehicles sold in the U.S. (The i3 numbers do include a few sold with the range extender plug-in hybrid option).

The European Alternative Fuels Observatory said it will be watching to see how the Opel Ampera-e MPV and Smart ED rollouts do in the BEV segment; and the BMW 530e and second generation Porsche Panamera do in the plug-in hybrid segment.

As for other vehicles to watch during 2017, there are six new vehicles that could make a difference. Long-range EVs are expected to help sales pickups. According to Matt Bohlsen, an investment advisory in Seeking Alpha, here are six EVs to watch this year: