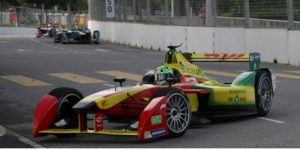 1. Formula E series: Lucas di Grassi drove his Abt Schaeffler Audi Sport electric racer for a perfect score to win the FIA Formula E Faraday Future Long Beach ePrix on Saturday. The driver had recently had his Formula E victory in Mexico City taken away after a post-race disqualification, so the victory in Long Beach and regaining the series point lead was a big win for the team. This victory is taking place during the second annual FIA Formula E series at its stop in Long Beach, Calif. Faraday Future was recently named the title sponsor for the 2016 Long Beach ePrix, the sixth stop on the 2015/2016 Formula E race season. Formula E was started up by veteran Spanish racing promoter Alejandro Agag, and was officially launched in September 2014 in Beijing. Sponsors and promoters of the race series are quite hopeful Formula E will educate and inspire people to see the potential of electric drives to power vehicles of all types quietly and with zero emissions.

2. VW and dealers: Volkswagen brand CEO Herbert Diess talked to media and to dealers during the National Automobile Dealers Association convention to deal with the diesel car emissions reporting scandal. Jason Kuhn, owner and Chairman of Kuhn Automotive Group, was chosen over the weekend by other VW dealers to lead a committee in negotiations with VW management. Kuhn and other VW dealers are talking to the German automaker about dealing with the crisis in a way to keep the VW brand viable with car shoppers. Volkswagen Group of America is now facing a suit filed by the U.S. Federal Trade Commission for falsely advertising that hundreds of thousands of diesel vehicles were environmentally friendly when that was far from the truth.

3. Karma Automotive will be bringing its extended range plug-in hybrid luxury sedan back into production before the end of the year. Along with dropping the Fisker Automotive company name, the automaker is fast at work setting up a factory in Costa Mesa, Calif. Parent compay Wanxiang is making minimal changes to the sports car, such as new dashboard displays and some additional safety features.

4.Insurance for self-driving cars: The auto insurance industry won’t be lowering premiums on driverless cars anytime soon, but it may not be a potential fiscal disaster for insurers. Semi-autonomous features like automatic braking and lane departure prevention are already reducing the frequency of common collisions; though high-tech autonomous vehicles may require costlier repairs, according to Moody’s analyst Jasper Cooper in a report. Profits will be cut into long term as accident rates decline, Cooper wrote. Autonomous vehicle leaders are carefully waiting for the U.S. Dept. of Transportation to issue guidelines to help the introduction of self- driving car technology within the next few months.

5. India has very big goal for the next 14 years – having all electric cars on Indian roads by 2030. An aggressive incentive program would allow Indian citizens to obtain electric cars with no down payment, and then use fuel savings to pay for the balance of the cars. It’s a long ways out with a working group now taking shape.

6. Los Angeles-based Evercar has the ambitious goal of bringing zero emission vehicles as shared rides – reducing traffic congestion and smog. Evercar will adding as many as 1,000 vehicles in the gre ater L.A. area, and has been targeting on-demand drivers for Uber and Lyft. These drivers can rent its vehicles for $5 an hour, and handling all fuel, maintenance, and insurance for those vehicles. Evercar is led by Michael Brylawski, and is a subsidiary of Vision Fleet; that company is changing its name to Evercar.

7. Tesla Motors may file suit in federal court to override state franchise laws that prohibit the company form selling its electric cars directly to dealers, avoiding establishing dealer franchise networks. For now, Tesla is negotiating settlements in various states that may permit the automaker to open a specified number of Tesla Stores and service facilities.

8. LG Chem a major battery supplier: As General Motors and other OEMs compete with Tesla with upcoming electric car launches, LG Chem will play a significant role in supplying batteries and other technologies, according to Navigant Research. LG Chem will supply batteries for the upcoming Chrysler Pacifica plug-in hybrid. Daimler, Ford, Renault, and Volvo. The South Korean company is now supplying not only battery packs, but also motors, inverters, and onboard chargers to GM for the Chevrolet Bolt.