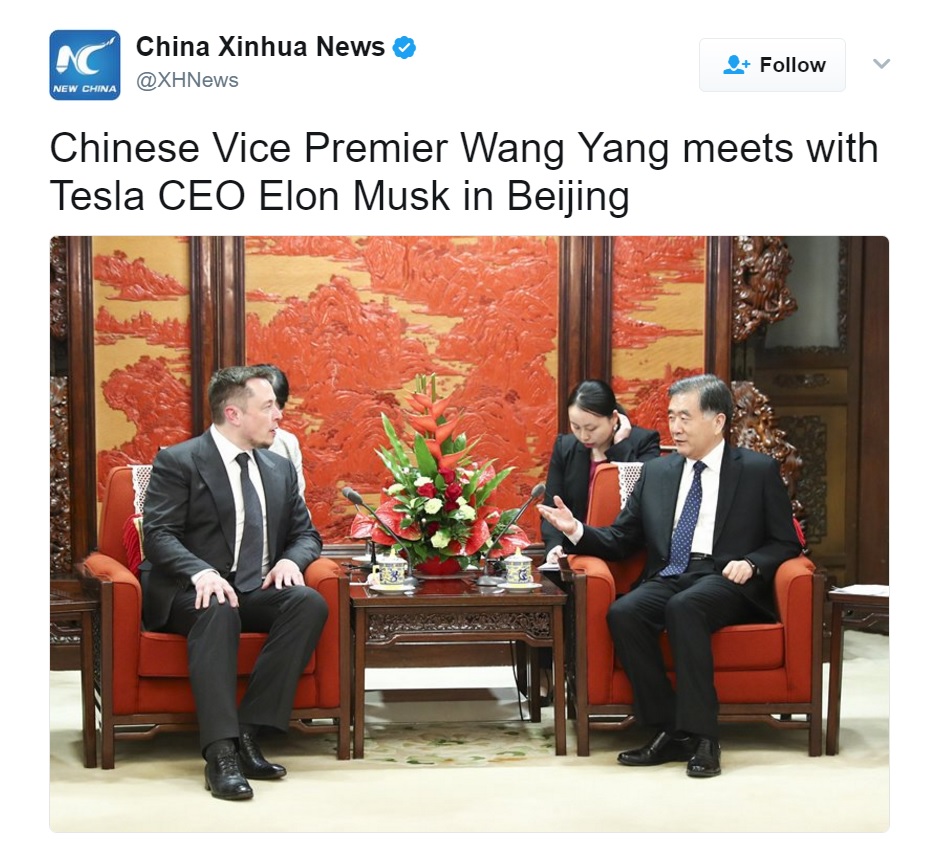 If you take a look at which global automakers have joint ventures with government-backed Chinese companies, you’ll notice only one missing: Tesla. Even Chinese automaker BYD, the global leader in electric vehicle sales, has a JV partnership with Daimler through Shenzhen DENZA New Energy Automotive Co., Ltd.

Tesla’s place in China may be changing soon. Last week, Tesla CEO Elon Musk met with Chinese vice premier Wang Yang. China’s Xinhua news service posted a photo from their meeting on Twitter. It’s the first time that Wang has met with only one automaker executive, according to Li Anding, a former automotive reporter for Xinhua and now a consultant with automakers doing business in China. “Wang usually meets with groups of people,” he said.

Li predicts the meeting and Twitter post are part of talks between the carmaker and government about creating a joint venture partnership for Tesla to manufacture electric cars locally.

A high-level official from China’s auto lobby said that Tesla has been holding meetings with potential partners in Chinese cities. Musk’s meeting with Wang, who previously headed the Guandong province, suggests that the province is a potential region for Tesla to build another plant beyond Fremont, Calif., and its Nevada “Gigafactory” battery plant.

Going this route would eliminate the steep 25 percent tariff Tesla currently pays to China on its imported cars selling in that country. The market has become the most important in the world for plug-in vehicle sales, and it’s going that way for Tesla as Musk has said in the past. Tesla earned $1 billion in revenue there last year, compared to $4.2 billion in the U.S.; and the electric carmaker has been exploring building a new factory in China in recent years.

Tesla could be well positioned in the near future to reach China’s two market segments for plug-in vehicle sales:  wealthy consumers looking for luxury vehicles, and workers who’ve moved to the city and need their first car.

Luxury carmakers see China as being vital. The BMW Brilliance alliance is the German luxury performance carmaker’s platform in China. On the affordable end for new car buyers, the Tesla Model 3 is expected to be very competitive against BYD and others in the China market. Taking away the 25 percent tariff by establishing a JV production plant would be part of bringing down the price of all Tesla vehicles sold in China – and offering a much more profitable prospect for the U.S. company.

As covered last week in Green Auto Market, the Chinese government may very well enact a steep mandate that is making automakers quite anxious – and is moving them to increase their plug-in vehicles sales volume in that market.  China’s Ministry of Industry and Information Technology proposed last fall that “new energy vehicles” make up at least 8% of new vehicle sales as soon as 2018, and that would go up to 12% by 2020. Included in those zero emissions vehicle numbers (based on California’s ZEV structure) would be all-electric, plug-in hybrid, and fuel cell vehicles covering light, medium, and heavy duty vehicles. That includes all new cars, trucks, and buses sold in the country.

The national government is considering blocking or delaying these proposed measures after industry feedback concluded that the targets are overly ambitious. It may be finalized one way or another by June, according to a government official. Even if that measure fails, the move toward solidifying China as the world’s largest plug-in vehicle market isn’t expected to go away, but demand has started to soften this year.

Sales of plug-in hybrid and battery electric cars fell nearly 5% in January to March compared with the same period a year ago, China’s Association of Automobile Manufacturers said. Analysts say that demand has dropped this year from the dramatic increases over the past three years due to a 20% cut in subsidy payouts by the national government this year, barriers being raised for entry of new car models, and debate over easing the proposed sales mandate for new energy vehicles.

Another sign that foreign companies won’t be backing away from China came last week from Tesla’s battery partner, Panasonic. The Japanese company announced last week that it had an opening ceremony for a new automotive lithium-ion battery factory in Dalian, China.

The company says that the factory is Panasonic’s first automotive battery cell production site in China, and it’s part of a corporate goal to have strong footing in the plug-in vehicle battery market. “Panasonic will further strengthen its global competitiveness in the automotive battery industry by the establishment of production sites in Japan, the U.S., and China,” the company said.