Nearly all the market forecasts you’ll read on plug-in electrified vehicles mention government incentives as essential for seeing sales numbers grow. These include tax credits and rebates, and in the U.S. that breaks down to available federal tax credits and a few states that are offering rebates and other attractive incentives.

As for the federal tax credits that come with purchasing a PEV, the highest credit of $7,500 applies to battery electric vehicles (with a few exceptions); plug-in hybrids are usually seeing tax credits in the $4,000 to $5,000 range. These tax credits do phase-out out eventually, based on how many PEV units have been sold. InsideEVs has published an analysis piece looking at the current state of tax credits per automaker.

Whether the new Trump administration will work to continue the tax credits is unknown. The program could be reviewed and adjusted sometime in the second half of 2017. It’s also possible that the new administration could let tax credit incentives fade out and disappear by not renewing them.

The IRS defines the tax credit phase-out process as: “The federal tax credit begins to phase out for a manufacturer’s vehicles when at least 200,000 qualifying vehicles have been sold for use in the United States (determined on a cumulative basis for sales after December 31, 2009).” 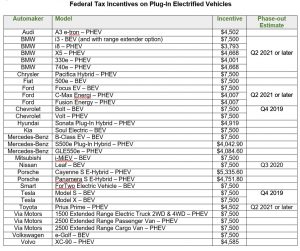 Each automaker’s qualifying PEV receives a federal credit until the 200,000th plug-in vehicle is registered inside the U.S.; at that point, tax credits are reduced and then phased-out over an allotted time period. Once the 200K mark is reached, the full tax credit continues through the end of that quarter and until the end of the next one. Credits on a $7,500 tax credit will drop to $3,750 for the next six months, and then to $1,875 for the next six months before going away. The chart below shows the phase-out quarter being the estimated time period when the tax incentive disappears.

Tesla Motors has the earliest phase-out in this forecast. The Tesla Model 3, which will launch by late this year, is behind the estimate of Tesla being the first automaker to lose its available tax credits.

As for state incentives, Tesla reports that 15 states offer electric vehicle incentives, along with the Canadian provinces of Ontario and Quebec. California’s attractive $5,000 rebate not long ago was split in half to $2,500; Rhode Island is the second state to offer a $2,500 rebate, which is the highest available rebate in the U.S.

Incentives vary by state, where some programs include PEV purchasing and HOV carpool lane stickers, and others include charging and parking incentives. Plug In America offers a state-by-state PEV program map with detailed reporting by state.