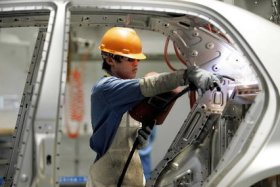 California is the best place in the US to sell hybrids, plug-ins, and other alt-fuel vehicles, but not necessarily the best place to base your vehicle manufacturing operations. Toyota will be moving from the Los Angeles suburb of Torrance to the Dallas suburb of Plano. The Japanese automaker will also expand its technical center in Ann Arbor, Mich.; Toyota’s facility in Kentucky will also move over to Texas. About 4,000 employees will be impacted by the move, yet it’s too early to say how many of them will be moving to Texas.

The formal announcement sounds grand – “to better serve customers and position Toyota for sustainable, long-term growth,” was the official company announcement. Unofficially, according to reports that began leaking out prior to the corporate announcement, it’s more about slashing expenses and moving away from California’s strict regulatory environment.

While Tesla Motors will continue building luxury electric cars in Fremont, Calif., and its newly acquired idle-parts distribution center is located in rural California, its advanced battery project will be out of state. Tesla’s upcoming lithium battery plant, Gigafactory, will be opening up in Arizona, Texas, New Mexico, or Nevada. It’s anticipated to require about $5 billion in investments with partners and would generate about 6,500 manufacturing jobs.

While cheaper land and hourly wages, and looser regulations, are probably playing their part, Tesla has another strategy: getting into markets where strict dealer franchise laws have blocked Tesla’s retail store growth strategy. Texas is very important for that reason, though one analyst thinks Nevada will be the winner. Nevada has a railroad line that connects directly to Tesla’s Fremont plant. Nevada is also rich in lithium pools, a big part of what goes into Tesla’s battery cells.

Fisker Automotive will likely be finding an office elsewhere. As new parent company Wanxiang America, a unit of China’s largest auto parts supplier, has taken over, there’s word of Fisker leaving its headquarters office in Costa Mesa, Calif., and moving out of state. (See Big Picture for more details.

California is not going away as an essential place to be for the auto industry. Engineering and design firms are based primarily in Southern California, and they play a key role in producing the next wave of new vehicles. In fact, Toyota’s design and racing units are expected to stay in Orange County. Some of the largest dealerships in the country are based in the state; and several alternative fuel providers (especially natural gas) have set up shop in California – with one of the principal reasons being state programs providing incentives. Fleets are very good customers, especially municipal fleets with dedication to clean transportation.

The auto industry will continue to be an integral part of the US economy and job creation – especially given that most other manufacturing sectors have shut down or moved overseas. California will continue to be a vital part of the industry’s future, but the limitations are always a factor. The weather’s great and there’s always something fun to do (surfing, Disneyland, Hollywood Blvd., riding BART into the city, etc.), but corporations are always looking into slashing costs and moving somewhere else.