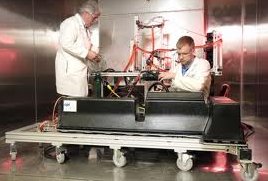 Not long ago, Navigant Research identified what it considers to be the top 10 most significant lithium-ion battery makers active in the electric vehicle market. Its top 10 ranking is based on systems integration, safety engineering, chemistry performance, geographic reach, manufacturing and product performance, pricing, and overall corporate financial health. Here’s the top 10 list with a bit of company background information….

You might notice a pattern here – of these 10 companies, only one is US based and nearly all others are in Asia and bring many years of success in automotive, engineering, and electronics to their battery divisions. The US has its share of electric carmakers, but the battery packs haven’t gone well for US-based manufacturing. A123 Systems went bankrupt and is making a few batteries now for its Chinese company owner; EnerDel came from Ener1 and its troubled partnership with Norwegian electric carmaker Think. EnerDel is struggling with lack of business and just cut its Indianapolis-area workforce by one third. Coda Automotive has pulled out of the electric vehicle market and filed for bankruptcy. Management is now focused on building its battery energy storage system through its Coda Energy division, which it started in 2011, and it’s focused on markets outside of electric vehicles.

LG Chem has done very well in the global li-ion battery market, but the US has been a bad experience for the top-ranked company. LG Chem finally began producing li-ion batteries in July for the Chevrolet Volt at its Holland, Mich. plant, but that’s been stopped again in the past few days. The US Environmental Protection Agency (EPA) has raised questions about how the cells are being made. The EPA has issued a subpoena on LG Chem to find out what chemicals have been used in production. The company says that it’s still confident it can get production ramped up once this investigation gets wrapped up.

LG Chem had received $151 million in US Department of Energy funds, but had not built any Volt batteries from Holland, Mich., until very recently – only from its South Korean facilities. It got fairly ugly earlier this year when the Office of the Inspector General reported that LG Chem employees were sitting around doing nothing but playing games and watching movies while being paid from these federal funds. LC Chem was instructed to return $842,000 as a result of the report.

Lux Research reported that electronics giant Panasonic’s lithium-ion battery division earned about $40 million in profits during Q2 2013 – much better than in Q2 2012 when the company lost $20 million. The company is expected to invest over $200 million during the next year to expand its li-ion production lines in Japan. Panasonic has supplied nickel-metal hydride batteries to Toyota and Honda hybrid models, but more recently has invested more in its li-ion division. Tesla Motors is a major client – Panasonic has been producing 60 kilowatt hour to 85 kWh battery packs for its Model S electric car. Lux Research reported that Panasonic has overtaken LG Chem and AESC in US li-ion sales. The US market is competitive for li-ion EV battery market share, but it’s now coming from companies based overseas.