Honda enjoyed its presence at the LA Auto Show, gaining lots of media attention for its new hydrogen-powered concept car and for winning the Green Car of the Year award. The 2014 Honda Accord took the green award for its high fuel economy ratings and performance features. All three variations were honored – the gasoline, hybrid, and plug-in hybrid versions. The Accord beat out four other finalists – the Audi A6 TDI, the BMW 328d, the Mazda3, and Toyota Corolla. Last year, another mid-sized US-based automaker car took the Green Car of the Year award for a model with gasoline, hybrid, and plug-in hybrid variants – the Ford Fusion.

During the same time that the LA Auto Show was launched, the Tokyo Motor Show was taking place. Toyota showed its FCV (fuel cell vehicle) concept sedan in Tokyo. Toyota said that it’s a “practical concept” of the fuel cell vehicle it plans to launch in 2015; the car will use hydrogen to generate electricity that can travel about 300 miles after a refueling. The concept car can hold four passengers and be refueled in minutes.

Those participating in the Green & Advanced Technology Ride & Drive at the LA Auto Show enjoyed driving the Chevrolet Spark EV, the Fiat 500e, and the Jeep Grand Cherokee with its new 3.0L EcoDiesel V6 clean diesel engine. The award winning 2014 Honda Accord Hybrid was also on hand for a drive around the LA convention center. It’s a bit pricier ($30K to $35K) than arch-competitor Toyota Prius, but it does have a bit more interior space and comfort, and its new dashboard has been designed for simplicity and style.

While Via Motors did not open up its E-REV ride and drive to the media, I was able to sneak a ride in its plug-in hybrid, extended range variation of the Chevrolet Express van; and took a peak at its plug-in version of the Chevrolet Silverado pickup. Both models – the VTRUX cargo van and VTRUX extended cab pickup – offer impressive plug-in ports with an AC inverter and power outlets for both 120 volt and 240 volt charges; the unit also offers a J1772 charging port.

During a press announcement, Via Motors company stakeholder Bob Lutz bragged about the VTRUX’ capabilities including being able to gain a few miles of extra range from solar panels now placed on the truck’s flatbed; and the ability to tap into the VTRUX’ battery pack for backup electricity during a power outage. Lutz was joined onstage by Via’s new CEO, John Weber, former president and CEO of Remy International, a key supplier to Via and to General Motors. Weber says that Via is meeting its fleet orders and will add consumer sales in 2014.

Connected Car Expo was held for the first time ever right before the LA Auto Show started up, and featured expert panelists on telematics, advanced technologies, and a growing alliance between automakers and technology giants. Autonomous cars were discussed by panelists that included Jeff Klei, North American president of major supplier Continental AG, and Ron Medford, Google’s director of safety for self-driving cars. Google has played a major role in testing out driverless cars, but doesn’t have a timetable for when it will release its own autonomous vehicles.

Out on the ground floor of the South Hall, you could see Hyundai’s “Survive the Zombie Apocalypse.” While it may have been placed there for the LA Auto Show, it was right next to the Connected Car Expo display booths and sort of stole the show. Connected Car Expo had some interesting exhibits, but the zombie display did grab most of my attention. It showed altered versions of two of its popular models, with these being renamed the Hyundai Santa Fe ZSM and Veloster Turbo ZSM (ZSM stands for Zombie Survival Machine).  These anti-zombie packages are sure to be more expensive than the MSRP starting price versions – but you do get all kinds of perks to fight off the undead – such as knife-blade wheels, dual chainsaws, a doom whistle, and a machine gun.

Hyundai’s display was started by Robert Kirmman, creator of “The Walking Dead” comic series (that inspired the hit TV series), designing a Zombie Survival Machine around a Veloster earlier this year. The Santa Fe ZSM design was built by Galpin Auto Sports and was unveiled at the New York Comic Con last month. 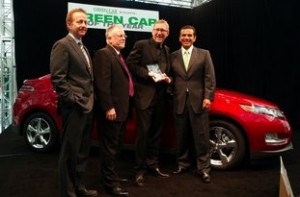