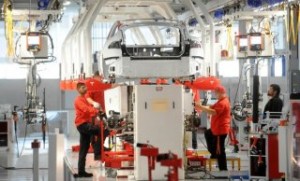 With Toyota Motor Corp. announcing its plan to shut down at its US headquarters in Torrance, Calif., and then moving to Texas by 2017, Tesla Motors will become the largest auto industry employer in California. Tesla now employs more than 6,000 people in the state, mainly at its production plant in Fremont. Tesla will add at least 500 more workers by year’s end in California, according to a company spokesman……. Tesla CEO Elon Musk received more media attention last week on where “gigafactories” are headed. Speaking at the World Energy Innovation Forum, Musk said the need for lower-cost batteries for autos and power storage will bring hundreds of these advanced lithium battery plants like the one Tesla is planning with fellow investors. Musk thinks cost will be reduced for these lithium-ion cells initially by 30%, but that will only get better. In other news, Tesla is getting a perhaps temporary break in the state of Missouri in the franchised dealers vs. Tesla online sales battle. Legislators have put a bill on hold until its reintroduced next year.