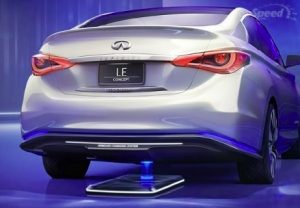 Wireless charging: Supporters of wireless EV charging see a future where wireless chargers would be built directly into roadways so the electric car would charge while you drive, eliminating range anxiety and travel time lost while the car charges. It uses inductive charging with two coils of wire in two objects, such as a pad on the electric car connected to its battery and a separate pad on the ground. When the pads are close enough, an electromagnetic field transmits current and charges the battery. Suppliers, including Qualcomm, Momentum Dynamics, and Evatran Group, are in talks with automakers about integrating this technology into their product planning. Some automakers are showing interest, but mass adoption is still years away. Mercedes-Benz will be the first on the market, offering wireless charging on its S550e plug-in hybrid next year. Qualcomm has licensed its Halo wireless EV charging technology to three suppliers: Southfield-based Lear Corp., U.K.-based Ricardo, and Switzerland-based BRUSA Elektronik AG. Momentum Dynamics first demonstrated its system on a Chevrolet Volt in 2012. Virginia-based Evatran Group Inc. makes and distributes a product it calls Plugless, a 3.3 kilowatt-hour system available for the Chevy Volt, Nissan Leaf EV, and Cadillac ELR. Developers of the wireless charging technology are finding a few key challenges including whether the EV is close enough, and aligned correctly, for the charging to succeed.

Fast charging uniformity: It isn’t here yet, and it’s not expected to be resolved anytime soon. Of the 1,855 fast-charging stations in the U.S., 1,077 have CHAdeMO connectors, 764 have SAE Combo connectors, and 289 have Tesla connectors, according to the Department of Energy’s Alternative Fuels Data Center. The state of fast charging depends on who built the car, with the CHAdeMO network only fitting Asian-made vehicles. The SAE Combo plugs only fit German and American cars. Tesla’s Supercharger network only connects to Tesla models. Beyond the Supercharger network, major infrastructure companies are usually offering both CHAdeMO and SAE Combo chargers, but it can be unclear for EV drivers which vehicles can plug into which stations. Some fast-charging stations have only one type of connector, while others have both, further complicating matters, according to a Scientific American report. Open source charging stations could resolve this problem, but that’s still in the early phase of development in fast charging. Open-source charging company Greenlots is testing out such a network using its SKY platform with Hawaiian Electric Company. It’s part of a joint research and demonstration project with the Electric Power Research Institute (EPRI). The fast charger is located prominently, at the Kapolei Commons shopping mall in West Oahu, and taps into solar power.

Shared charging: The shared economy model, popularized by Uber, Lyft, and Airbnb, is transferring over to EVs. Finding public charging stations outside major cities can be frustrating for EV owners. Private individuals with chargers are participating in shared networks to make sure EV drivers can make it home. Renault Group launched Elbnb, a website and application in Sweden that maps out charging stations for EVs. In the U.S., PlugShare has become a popular resource. The PlugShare mobile app maps out tens of thousands of additional outlets from private residents, according to the company. The map helps EV drivers find charging, mostly for free, in places outside the more obvious charging stations. Airbnb has partnered with Tesla to offer dozens of free charging stations to top hosts in Airbnb’s lodging network, who hope to attract EV drivers as customers.

The state of hydrogen stations: Japan now has about hydrogen 80 stations operating, and Germany has 50. The U.S. now has 29 hydrogen stations in operation with most of them in California, according to the U.S. Department of Energy. In late 2015, the California Energy Commission predicted 50 hydrogen stations will be opening in the state by the end of 2016, but that goal looks like it will be missed. FirstElement Fuel is bringing hydrogen fueling stations to California under the True Zero brand. The company has 15 hydrogen stations completed and 13 of those open for consumers to access. Fuel cell manufacturer Plug Power says it has started working on the design of new hydrogen fuel cells that would be used in battery-powered delivery trucks. Plug Power currently makes fuel cells that are used in fork lift trucks.

‘Toilet-to-Tank Filling Station’ in Japan: Fukuoka, a southern Japanese city, now has a hydrogen fueling station in place fueled by biogas coming from a combination of methane and carbon dioxide produced by the breakdown of wastewater from a central sewage plant. It’s now the second of its kind, following a demonstration facility that used similar technology at a Fountain Valley, Calif., wastewater plant that started in 2011 and is no longer in operation.  The Fukuoka hydrogen station opened in late 2015 and is available to gas up fuel cell vehicles. The plant comes from a $12-million investment from Japan’s government, plus research, engineering, design and building work by Mitsubishi, Toyota, and Kyushu University.

Beyond plug-ins and fuel cell vehicles: Will NanoFlowcell and Energy Independent Vehicles knock out battery- and hydrogen-powered electric motors? It depends on who you ask. Battery electric vehicles are hitting a “dead end” compared to the zero emission electric motor powered by NanoFlowcell technology, says Nunzio La Vecchia, chief technology officer of NanoFlowcell Holdings, and inventor of the NanoFlowcell technology for energy storage. Flow-cell batteries can be “refueled” in minutes at centralized filling stations versus hours needed with EV charging, he says. NanoFlowcell’s alternative solution uses what it claims is a “shoebox-sized” flow cell and two tanks, with a total capacity of 150 liters (about 40 gallons) of positive and negative liquid electrolytes. That’s superior to lithium-ion battery packs weighing up to 1,500 pounds, he says. Last year in Geneva, the company displayed its QUANTiNO concept car, a type of fuel cell electric car with over 620-miles range and touted to be on the road; but NanoFlowcell faces the steep challenge of winning over support for its new technology and supporting deployment of a fueling infrastructure across the country that fuel cell cars are navigating through.

Energy Independent Vehicles are being developed that will separate them from EVs and hydrogen fuel cell vehicles, says Peter Harrop, chairman of the IDTechEx. Energy independent means they’re getting their energy through converting wind, sun, and even rain into power for the vehicles. Harrop says they’re in the testing phase and will be on roads in the next few years. During a presentation at the Electric Vehicle Symposium (EVS29) in Montreal in June, Harrop showed a sampling of vehicles – including cars, planes, and boats – and how they’ll be powered. Along with renewable power sources, Harrop said that advanced vehicle technologies will make them viable for wider adoption in the future. These technologies will include next-generation batteries, energy harvesting from multiple sources, lightweighting, smart materials, and what his firm calls “structural electronics.” Examples of the energy independent vehicles rolling out include Hanergy Holding Group, a Chinese company, having unveiled four solar-powered concept vehicles outside its Beijing headquarters in early July; and Solar-powered Stella Lux being developed by students at the Eindhoven University of Technology in the Netherlands using carbon fiber and aluminum for light weight.