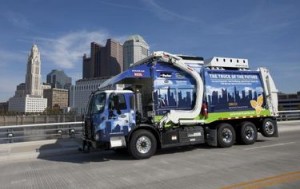 Fleets looking for hybrid and plug-in Class 3-8 trucks and vans have fewer options today than before – with Boulder Electric Vehicles and Smith Electric Vehicles pulling down their shutters and Eaton deciding to leave the hybrid medium-duty truck market in North America. The Parker Hannifin RunWise hydraulic hybrid has been seeing more interest from fleets this year, primarily among refuse trucks, and that’s been expanding into other sectors including parcel delivery trucks.

Fleets are impressed with the benefits – including fuel savings up to 4,300 gallons per year for each vehicle; capturing 71% of lost brake energy; and significantly reducing carbon emissions. The Runwise Advanced Series Hybrid Drive System is distinct in the market; when starting up, the engine charges a high-pressure accumulator in the hydraulic system. Hitting the brake pedal drives energy back from a reservoir into the accumulator – driving energy normally lost in braking back into powering the truck. It’s similar to regenerative braking systems currently being used in several hybrid passenger cars.

Fleet owners are more educated today about their options than years ago, DeCoster said. They’ve been reading up on alternative fuel vehicles and have checked vehicles out at industry conferences. They’re looking to save on fuel and lifecycle costs and have concerns about the driveability and adoption by drivers, DeCoster said. While they’re feeling pressure on reducing emissions, cutting costs has been higher on the list for more fleets. Saving on fuel costs and brakes has been impressing fleets enough to make the investment in RunWise trucks. Payback is about two-to-three years in duty cycles for fleets making the RunWise truck acquisitions, he said.

Class 8 refuse trucks with their heavy payload and stop-start patterns are producing a lot of energy captured in the RunWise drive system. Trucks are classifed as “severe duty” in the refuse truck industry as refuse trucks stop and start about 2,000 times a day while collecting garbage.

Fleets are starting to take battery-powered vehicles more seriously this year than before and are looking at their options. Along with RunWise, Smith Electric Vehicles is resuming production this fall of its Newton trucks; TransPower offers Class 8 drayage tractors that are being field tested at the Port of Los Angeles; Electric Vehicles International has delivered electric walk-in vans to UPS and Frito-Lay; Zero Truck converts Isuzu NPR medium-duty trucks to electric vehicles for municipalities; Hino Trucks, which just celebrated 30 years doing business in the US, since 2012 has offered its Class 5 cab-over diesel-electric hybrids; and XL Hybrids just received certification from the California Air Resources Board (CARB) for its hybrid-electric conversions of Chevrolet Express and GMC Savana vans.