Mayors commit to ZEVs:  Twelve cities have committed to converting over to zero emission vehicles by 2030 by signing the C40 Fossil-Fuel-Free Streets Declaration. The mayors of

London, Paris, Los Angeles, Copenhagen, Barcelona, Quito, Vancouver, Mexico City, Milan, Seattle, Auckland, and Cape Town have signed the declaration that commits to procuring only zero-emission buses from 2025, and to make sure a major area of their city is zero emission by 2030. Commitments include increasing usage of walking, cycling, public transportation, and shared transport; reducing the number of polluting vehicles on their streets; converting over to ZEVs for their city fleets; and collaborating with suppliers, fleet operators, and businesses to shift over to ZEVs and reduce vehicle miles in these cities. Paris mayor Anne Hidalgo, who led the ban for elimination of fossil fuel-powered vehicles in the city, is serving as C40 chair. “Working with citizens, businesses and mayors of these great cities we will create green and healthy streets for future generations to enjoy,” Hidalgo said.

The state of AVs:  A new global map by Bloomberg Philanthropies and The Aspen Institute shows were autonomous vehicles stand in cities around the world. They’re broken up into two categories – Piloting Cities and Preparing Cities. Piloting cities have conducted tests of self-driving cars, or will do so in the near future. Preparing cities are conducting long-range surveys of the regulatory, planning, and governance issues raised by autonomous, but have not yet started pilot projects. The US leads the way, followed by the UK and China. Cities make the most sense to study, with technology giants, automakers, and startups focusing on these markets. That’s where future AV customers are expected to live and work, according to the study.

Seven years after the credit system was initiated for producers of low-carbon fuels, cities and companies are using renewable diesel coming from fats and oils for all types of vehicles, including fire trucks to UPS delivery trucks. Bloomberg reported that the value of the LCFS credits for renewable diesel exceed those from electric vehicles fourfold and are second only to ethanol. The market “is definitely growing,” said Dayne Delahoussaye, head of Neste’s North American public affairs, the largest supplier of renewable diesel in California. “Renewable diesel has become very popular with the refining community as a good tool to meet obligations.”

Dyson launching EV:  British company Dyson, best known for home appliances such as its bagless vacuum cleaners, will be launching an electric car by 2020. The company will be 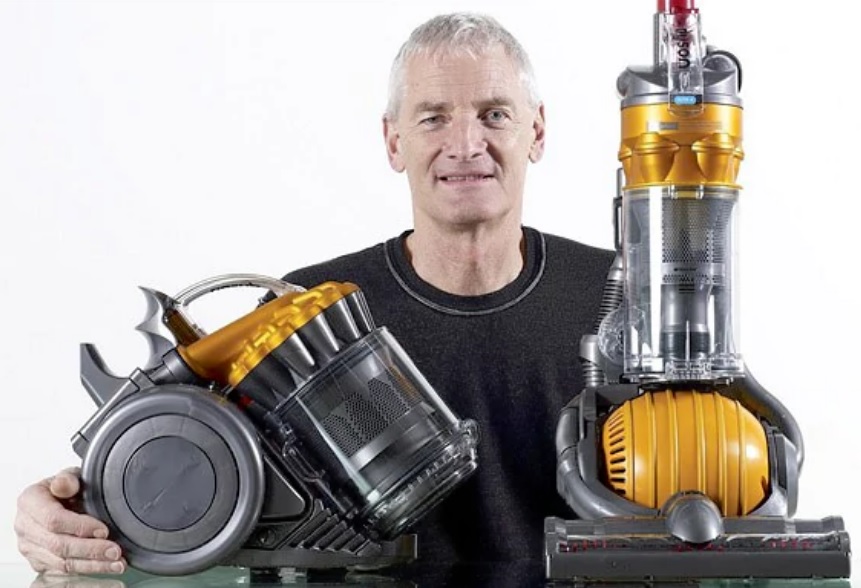 investing about $2.7 billion in solid-state battery technology and designing the EV. It will be put together by a team of more than 400 employees, said founder James Dyson. It won’t be an affordable Tesla Model 3, Chevy Bolt, and Nissan Leaf competitor. Dyson said it will be an expensive car, and those interested will have to “wait and see” what it’s going to look like. Rumors have been floating about the company getting into the EV race for a few years now, which was clarified last year in a government document filing. The company’s sales have grown in recent years as it expanded its presence in Asia. That will be a big part of its EV launch.  “We see a very large market for this car in the far east,” Dyson said.

Ford working with Lyft:  Ford will be partnering with ride-hailing company Lyft to share information supporting acceleration of a commercial self-driving car service launch. It’s the third alliance the startup has formed following last year’s investment by General Motors; Waymo and autonomous software and hardware firm Drive.ai forged alliances with Lyft earlier this year. Lyft wants to be the first ride-hailing company to deploy self-driving cars by a major automaker, according to the company. Pilot programs should be launched fairly soon and fully operational by 2021. Ford said the partnership will be make self-driving rides available quickly and safely to customers using the mobile app. Ride-hailing giant Uber had been investing heavily in autonomous vehicle testing through automaker alliances. That’s been sidelined since explosive scandals have broken this year with co-founder and CEO Travis Kalanick being replaced by former Expedia CEO Dara Khosrowshahi. Lyft is well positioned for growth in mobility services and deploying self-driving mobility services from the trial phase through commercial deployment.

California may ban fossil-fuel vehicles:  California may join up with China, the UK, France, and Norway in banning fossil-fuel powered vehicles. Mary Nichols, chairman of the California Air Resources Board, told Bloomberg Friday that Gov. Jerry Brown is interested in 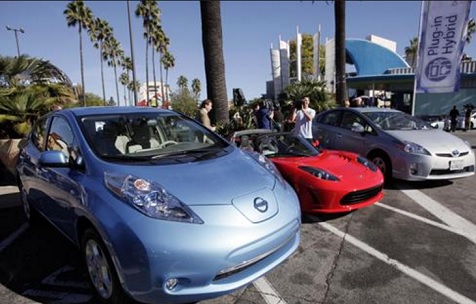 exploring barring the sale of vehicles in California with internal combustion engines. The earliest ban would be a decade away and ties into the state’s campaign to battle climate change. The move would send shockwaves to automakers, which have already been working on meeting the state’s zero emission vehicle mandates in the world’s largest auto market. A more pressing issue for California has been how the Trump administration will be ruling on the fuel economy and emissions standards, and if California’s ZEV guidelines will be included.

UK banning fossil-fuel powered cars:  The United Kingdom will be banning the sale of vehicles powered by gasoline and diesel by 2040, and would like to see all them off their roads by 2050. The UK

follows France, which decided to ban all fossil-fuel powered vehicles by 2040. The mayors of London, Paris, Madrid, Mexico City, and Athens are developing their own policies for clean air and climate change, would like to ban diesel vehicles. The British government has faced legal pressure from a series of lawsuits, and the national government has been taking steps to scrap diesel-powered cars. Nearly 200 million pounds (about $261 million) will go to local governments in the UK to help them restrict access by diesel-powered vehicles to extremely polluted roads. Battery electric vehicles will probably be the route chosen by the national government to replace gasoline and diesel powered cars.

M-B motorsports joining Formula E:  Mercedes-Benz will be joining ranks with other automakers by competing in the Formula E electric racing series starting in the 2019-2020 racing season. In 2018, the automaker’s motorsports division will finish its long-term involvement with German racing series Deutsche Tourenwagen Masters (DTM) to focus on Formula E. The company has been committed to racing and transitioning over to eco-friendly vehicles in recent years, including winning championships with its hybrid technology in the Formula One series. Mercedes-Benz will becomes the ninth auto manufacturer to join the series. Other automakers include Audi, BMW, Citroen DS, Jaguar, Mahindra, Renault, and electric carmaker startups Nio and Faraday Future.

Get ready for AltCar Expo:  The AltCar Expo & Conference, now in its 12th year, will be taking place in Santa Monica, Calif., on Sept. 15-16, 2017. The free admission two-day event features a series of

speaker panels on pressing topics for fleets, government officials, vehicle manufacturers, technology companies, and enthusiasts interested in the issues and trying out the vehicles. AltCar Expo offers the best Ride & Drive out there, with several green cars to drive and a few commercial fleet vehicles to see. With the Trump administration deciding to exit the Paris climate accord, leaders are looking for other channels to address the issues; that includes the role California is playing.

“AltCar Expo was created to provide a forum for both industry and the general public to learn about existing alternatives to the way they use energy and transportation,” said Christine Dzilvelis, Organizing Partner of AltCar Expo. “Today, 52 percent of all Zero Emission Vehicle (ZEV) purchases are happening in California, and our state continues to lead the nation as it relates to clean energy policies that are driving national and global change. Our intention is for California to continue to lead in this area, and AltCar offers a venue to generate awareness about existing and future technologies and encourage their use.” 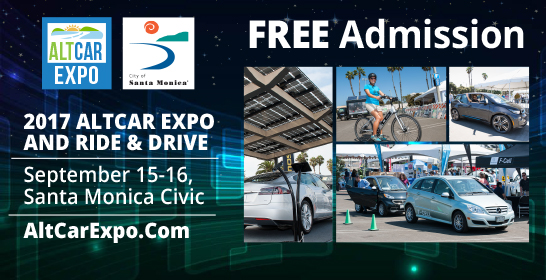 Banning fossil-fuel powered vehicles:  France will be banning the sale of gasoline- and diesel- powered vehicles by 2040, said Ecology Minister Nicolas Hulot on Thursday. Hulot was speaking on France’s commitment to honor the Paris climate agreement now that President Donald

Trump has pulled the U.S. out of it. France aims to be carbon neutral by 2050 to honor the agreement. He acknowledged that stopping sales of fossil-fuel powered vehicles would be a “revolution,” solutions are available and French automakers would be up to the task. Typical to markets around the world, electrified vehicles only make for a small share of total vehicle sales. During the first half of this year, gasoline and diesel vehicles made for 95.2% of new vehicle sales in France; hybrids made up about 3.5% and plug-in electrified vehicles made up about 1.2% of the market. The Renault Zoe, seen in this image in its e-Sport Concept version, has been a top seller in France and throughout Europe.

Terrafugia flying car maker gets backing:  Chinese automaker Geely, owner of Volvo Cars, just purchased startup flying car maker Terrafugia. The startup was launched by a group of MIT alumnae and is considered to be the furthest along in the flying car space. The company last year won a certification from the Federal Aviation Administration that would make it easier for owners to someday drive the cars on land and air. One of Google’s founders, Larry Page, has invested a lot in other flying car startups, while Uber and airplane manufacturer Airbus have also joined the race. But it’s not really a flying car, the company said. “Don’t think of it as a car that flies. Think of it as a plane that drives,” Carl Dietrich, CEO of Terrafugia, told TheDetroitBureau.com when the concept made its debut at the New York Auto Show in 2012.

Virginia, Michigan, Minnesota, and California, have enacted new fees this year. Six other states have introduced legislation this year that would require PEV owners to pay a separate fee, including Indiana, South Carolina, Kansas, Tennessee, New Hampshire, and Montana. Vermont and Oregon are considering a fee based on vehicle miles traveled, rather than fuel type, but these rules may not pass through. PEV fees have been passed to pay for more transportation infrastructure upgrades, and to make up for lost tax revenue that PEV drivers don’t have to pay in gasoline and diesel taxes. Incentives are being added to get consumers to buy these cars, but the fees are mostly being charged on an annual, recurring basis.