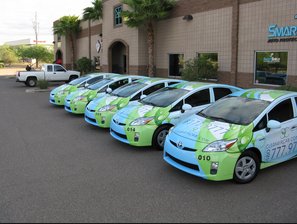 So why would a company like Elio Motors with its three-wheel electric car choose fleets as its primary market instead of consumers? The company is moving through red tape for its $185 million loan through the US Dept. of Energy’s Advanced Technology Vehicle Manufacturing program. While it may sound strange that a specialty electric vehicle maker would choose the fleet market, there are reasons for it. According to a post on the Elio Motors Blog: “We have talked about ‘why Elio’ quite a bit, but to the fleet customer the economics are many times larger than for an individual. Think about it, you can save $1,500 a year on fuel which is enough to make a LOT of payments.  Now multiply that times 100, or 200 or as much as 1000!  That is real (huge) savings for companies.  Each gallon of fuel saved is money in their pocket and helps save our environment.”

That sounds very familiar to conversations I’ve had in the past couple of years with fleet managers. There sometimes are concerns and mandates to reduce emissions and fuel consumption, but in the end, containing costs is the top priority given to fleets in corporate, government, and other sectors. For the clean transportation industry, fleets are the focal point of direct marketing. Tesla Motors is benefiting from upper income, educated individuals signing on for lease payments on the Model S, but as for the rest of the green vehicles and infrastructure, fleets make up most of the marketplace. Besides buying in volume, they bring institutional credibility to the new technology. If a municipal fleet brings in 150 compressed natural gas trash trucks; or a delivery fleet reduces its fuel consumption and emissions 20% in one year by switching over to hybrids, that truly stands out with media, stakeholders, and the general public.