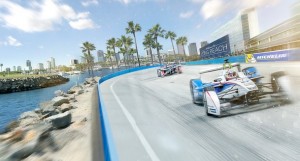 The Formula E electric race series was cheered on by several thousand people in grandstands in Long Beach, Calif., on Saturday. Sponsors and promoters of the race series are quite hopeful Formula E will educate and inspire people to see the potential of electric drives to power vehicles of all types quietly and with zero emissions.

Piquet was the sixth different first-place winner in the six races that have so far taken place in the 10-race Formula E series. Nicolas Prost of e.dams-Renault took first place about three weeks ago at the Miami race. The next stop in Formula E will be Monaco ePrix in Monte Carlo; then it will go to Berlin and Moscow before wrapping up in London in June.

Each of the race’s 20 teams had to change to a second car during a pit stop. The batteries weren’t able to cover the entire 39-lap race, so the drivers jumped into duplicate racers. It sounded quite different than the regular Long Beach Grand Prix with Formula One racers roaring through the streets of downtown. Formula E cars whizzed by the stands with their rubber tires squealing on the turns.

General admission to the Long Beach race was free this time; that’s likely to change the next time Formula E comes to Long Beach. That could be as early as next year. Organizers of the event have been in talks with sponsors and city officials in Asia, Europe, and the US about making this race series an annual event. The founding partners sponsoring the race series are BMW i, Michelin, Renault, Qualcomm, DHL, and wrist-watch company Tag Heuer.

BMW displayed its i3 and i8 electric cars inside the eVillage, located on the inside area of the race track. Zero Motorcycles displayed its e-bikes and shared an exhibit space with e4 Advanced Transportation Center of Southern California (ATC); and with Dutch organization Coast to Coast Smart e-Mobility (C2C). Qualcomm displayed an electric race car.

Students with interest in a future engineering career from Long Beach high schools participated in a race earlier that day. Students from Cabrillo, Jordan, McBride, Millikan, and Santa Barbara high schools, and the California Academy of Math and Science, competed in a race in cars they had assembled from kits. Schools also had display booths in the eVillage.

A few days before the race, students at California State University Long Beach received a special guest lecture from Formula E founder and CEO Alejandro Agag. He took questions from students that ranged from the overall state of the business of motorsport to technical questions about the unique challenges of designing the battery housing of the Formula E car. In 2012, veteran Spanish racing promoter Agag won over support from the Federation Internationale de l’Automobile (FIA) to start Formula E.  The 10-race series officially launched in September 2014 in Beijing.