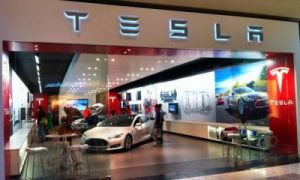 “This [the ban on Tesla] is a disturbing trend and deals a big blow to the future of automotive retailing. It also pushes the US behind the rest of the world. So far the resistance to Tesla and any kind of progressive thinking in auto sales had been relegated to the southern states. New Jersey’s decision could now influence states such as New York and Massachusetts, which have so far been more supportive of Tesla.” – Kumar Saha, senior industry analyst with Frost & Sullivan’s Automotive and Transportation research group.

On March 11, New Jersey Gov. Chris Christie’s cabinet members and appointees voted to block Tesla from direct sales. The administration ruled in favor of a state requirement that new cars must be sold through licensed franchises from a rule proposed last October by the New Jersey Motor Vehicle Commission; that happened around the same time Tesla opened two of its own stores in the state. Tesla CEO Elon Musk took a shot at Gov. Christie, accusing the expected 2016 Republican presidential candidate of making a “backroom deal” to keep Tesla out of the state. Musk put more pressure on Christie, whose administration has been taking heat for alleged bullying of opponents – the most notable event occurring last year when former high-ranking officials faced potential criminal charges after ordering lanes approaching the George Washington Bridge be closed, creating a traffic nightmare.

In New Jersey, the New Jersey Coalition of Auto Retailers spent more than $155,000 on lobbying last year. Gov. Christie received about $65,000 in campaign contributions from people associated with the auto industry during last year’s primary and general election campaigns.

There’s a lot at stake in how these lawsuits and lobbying ventures play out. The legal history of state franchise laws protecting dealers are not too clear – that varies by industry with many retail sales transactions being conducted in corporate stores without any franchised operators in these branded networks. The state franchise laws are about a century old now, and other automakers have taken on the fight of breaking them long before Tesla Motors. Dealer networks have been very successful at lobbying in state legislatures and winning court battles.

Ford Motor Co. and General Motors Co. attempted to operate a few company-owned stores in the late 1990s and early 2000s as internet sales became more economically viable. Dealers won that battle – today you can shop for, and spec out, cars on OEM websites, but you have to buy or lease them through a dealership. Truecar.com experienced a similar experience after its 2011 Superbowl commercial promising the best local market price from dealer in their area. Dealers in several states attacked Truecar for allegedly violating laws regulating auto brokering, price advertising, and other legal issues. The onslaught hurt Truecar’s finances, as about 2,600 dealers bailed out of Truecar; it forced the company to spend much of the year overhauling its relations with dealers.

As Frost & Sullivan analyst Kumar Saha said, automotive retailing is changing fast. Dealers may be winning some of the state legal battles with Tesla, but may be losing a lot more business in the future as the business model changes.