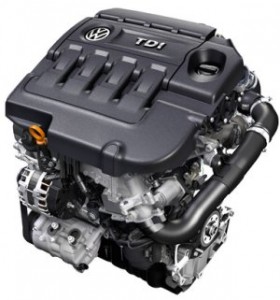 How does this one sound? If you’re driving the new Volkswagen Passat turbocharged direct injection (TDI) sedan, you get 43 mpg on the highway, can travel 795 miles on one fueling, and it carries you with 140 horsepower and 236 lbs/ft of torque. The 2014 Passat TDI Clean Diesel starts at $26,675 (excluding taxes and destination charges), so it’s very price competitive with midsize gasoline engine cars that don’t get as good a mpg rating or driving range per fueling.

The latest TV commercial for the Passat TDI emphasizes freedom from range anxiety – you can drive from Los Angeles to Philadelphia on just three stops for fuel – just a hop, skip, and a jump. Other midsize sedans need a lot more fuel stops, VW says – and you can receive a $1,000 fuel reward card on your purchase. It seems to be working – Volkswagen is leading sales for diesel passenger cars in the US. About 55% of diesel passenger cars sold in the US are the Volkswagen Passat and Jetta (with the Passat at 29%), and these two models are way ahead of any other diesel passenger car.

“Cruise from A to B, not from A to filling station to B,” says VW’s website promoting clean diesel TDI. The Passat and Jetta are joined by the Jetta SportWagen, Golf, Beetle, Beetle Convertible, and Touareg in the VW clean diesel TDI family. VW’s Audi division currently offers five clean diesel TDI models – the A6, A7, A8 L, Q5, and Q7. For the 2015 model year, Audi is launching a new version of the Audi A3 TDI. At the New York Auto Show, the 2016 Audi A3 TDI Sportback was unveiled – bringing a station wagon to Audi’s TDI lineup.

VW seems to be enjoying a few advantages in its clean diesel offerings……
• TDI is a registered trademark for VW and Audi – turbocharged direct injection brings more power and efficiency to sedans and taps into what many American car owners admire about German automotive engineering. VW is focusing specifically on TDI clean diesel models of its cars that also come in gasoline-engine versions – and is counting on the concept to sink into consumer minds.
• Clean diesel is considered by some people to be an alternative fuel – while it’s not as clean as electricity, natural gas, biodiesel, or propane – it is an alternative to gasoline. For car shoppers, buying a diesel engine car can be as big a switch as buying a hybrid or plug-in. It also helps that US fuel stations are only selling ultra-low sulfur diesel (ULSD) these days – adding more weight to the “clean diesel” identity.
• You can find diesel just about anywhere at US gas stations. With the extended range on a fueling of a VW Passat and with fuel stations all over the map, range anxiety is relieved. (Diesel does cost more than gasoline, but the fact that they’re getting great mpg seems to be offsetting that price differential).
• TDI Clean Diesel technology is part of VW’s Think Blue initiative, the automaker’s goal of creating and encouraging eco-conscious products and behaviors. While some people scoff at the idea of clean diesel actually being clean (especially when compared to electric vehicles), it does play into the drive for clean transportation – reducing emissions compared to gasoline engines on a mile-per-mile basis.