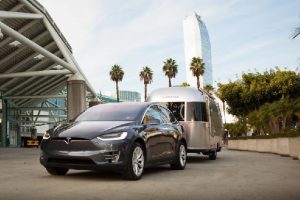 Previously known for being the showcase for electric car launches and ride-and-drives, crossover SUVs are taking more of the attention this year. That doesn’t mean that new electrified vehicles and advanced mobility technologies were forgotten.

Automaker displays this year at the Los Angeles Auto Show have been weighted toward crossover SUVs as market demand grows in an era of low gasoline prices and higher profit margins selling utility vehicles over PEVs. The all-new Ford EcoSport debuted ahead of the L.A. Auto Show on Monday, one of five crossovers and smaller SUVs that were premiered. Other small SUVs being shown are the Toyota C-HR, Jeep Compass, Mazda CX-5, and Alfa Romeo Stelvio.

Ford says that the non-electrified all-new 2018 EcoSport is a compact SUV designed to be “the perfect partner for a life full of surprising possibilities. What you need when you need it. Trim outside, spacious inside, it’s nimble and ready for just about anything.”

While Volkswagen has pledged to roll out 30 new PEV models by 2025, the gasoline-powered 2017 Atlas crossover has been its star at the L.A. Auto Show. On the plug-in electrified vehicle debut side, VW did announce changes to the e-Golf. The 2017 Volkswagen e-Golf comes with a new 35.8 kWh battery and 124 miles of range.

Tesla Motors: Tesla exhibited a Model X towing an Airstream trailer (see photo above). Inside the trailer, you could view a color display board for exterior and interior color combining options. A towing hitch was attached to the Model X in the display hall; the hitch can carry trailers that go up to 5,000 pounds. It was the first time Tesla has displayed an exhibit at the L.A. Auto Show in a few years.

Hyundai Ionic Electric: Not a new debut, Hyundai has increased the electric vehicle’s range to 124 miles instead of 110 previously announced, and it goes on sale late this year. Hyundai also made three announcements about mobility services connected to the Ioniq during the L.A. Auto Show. The new “Ioniq Unlimited” subscription-based ownership experience has one fixed payment that includes unlimited mileage, electric charging costs, scheduled maintenance, wear items and all typical purchase fees such as registration. A second program is being carried out with WaiveCar, an electric carsharing program running on advertising dollars. Consumers can drive an electric Ioniq wrapped in advertising with a rooftop mounted digital display for two hours at no charge.

For the third announcement, Hyundai revealed an autonomous version of the all-electric Ioniq during the show. The company will offer rides in the self-driving version at the Consumer Electronics Show in January. It uses a Lidar system with three advanced radars combined with three forward-facing cameras, blind-spot sensors, GPS antenna and “smart cruise” radar to provide 360 degrees or protection and sensing.

Jaguar I-Pace: Jaguar showed what will be the first step in its electrification plans. The all-electric I-Pace crossover SUV will have a 90-kWh battery for 220 miles of range. Jaguar says that it will be a high performance crossover with all-wheel drive propelled by dual electric motors, one on each axle. Its combined output of 400 horsepower and 516 pound-feet of torque. It’s expected to be released in 2018.

McLaren Hyper-GT: McLaren’s hybrid super concept car is said to follow the iconic McLaren F1, which has been a star at Le Mans for nearly 25 years. It will be the “spiritual successor to the F1,” according to the company. The prototype Hyper-GT is coming out next year and a production version is set for 2019.

Chrysler Pacifica Hybrid: While “plug-in” was dropped from the Pacifica’s name for the non-internal combustion gasoline engine version, it is a plug-in hybrid electric vehicle. It’s Chrysler’s first plug-in model to enter the U.S. market beyond test models. It is also an historic moment for Chrysler and parent company FCA Automotive. The gasoline-engine Pacifica is replacing the Chrysler Town & County and Dodge Grand Caravan as its minivan offering. The Caravan and its other variations had essentially created the minivan segment in the 1980s, and the Pacifica Hybrid will make for the first electric passenger van to be sold mass market. The 2017 Chrysler Pacifica starts at $41,995, not including destination. With the available $7,500 federal tax credit, customers can get the Pacifica Hybrid is for as low as $34,495, not including any state or local incentives. It was certainly a pleasure to drive and learn more about during the L.A. Auto Show’s ride and drive.

Cadillac CT6 PHEV: While earlier this year, Cadillac announced that its low-selling ELR plug-in hybrid would be discontinued, there will be a replacement coming out soon. Starting early next year, the CT6 sedan will have a $76,090 price tag before the $7,500 federal tax credit and potential state incentives lower the price. It comes with powertrain technology similar to that used in the Chevy Volt, and will be getting 30 miles of electric range.

Mini Cooper Countryman S E ALL4: BMW’s Mini brand has launched its first plug-in hybrid. The Countryman is larger than the original Mini Cooper with about 30 percent more cargo space. It comes with a 1.5-liter turbo thee-cylinder engine merged with electric propulsion, a 7.6-kWh battery, and a six-speed auto transmission.

Mitsubishi eX Concept: Mitsubishi’s Outlander plug-in hybrid SUV has been a top electric seller in Europe and will finally be rolling out in the U.S. next year. The all-electric eX Concept is said by Mitsubishi as a hint to the future. As a new part of the Renault-Nissan Alliance, there’s been speculation over whether Nissan and Mitsubishi will share electric vehicle technologies. 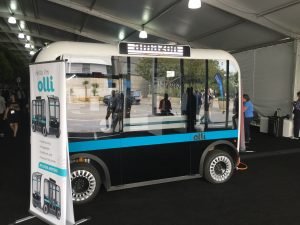 Motors.” That was the first display you’d see when walking in the Technology Pavilion last week. Local Motors specializes in co-creation design projects, such as the 3-D-printed, self-driving Olli minibus that’s currently being tested in pilot programs. It appears to be working on this electric, self-driving minibus project with Amazon, as you can see displayed in the exhibit photo. Designed to transport up to 12 riders, Olli uses IBM Watson’s “Internet of Things” cognitive computing capabilities to learn from data generated from sensors on the vehicle and encourage an interactive transit experience. Phoenix-based Local Motors is also working on a range of designs for 3-D-printed cars. The company recently sold some Olli units in Copenhagen and plans to announce its U.S. debut in next few months. It’s currently being tested on private roads in the Washington, D.C. area. On Wednesday of last week during AutoMobility LA, Olli shuttled Local Motors CEO Jay Rogers to his keynote address. 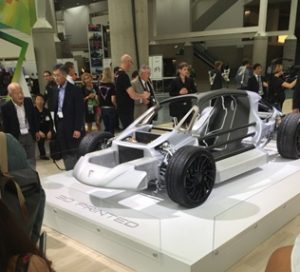 technology and a combination of aluminum and carbon fiber. The company’s concept was designed to change the way cars are manufactured by using technology that reduces pollution and the amount of materials. Divergent 3D’s Blade printed supercar greeted visitors in the atrium of the LA Convention Center. The company also showed a 3D printed motorcycle, and a sports car frame displayed, as seen in this photo, during the L.A. Auto Show.

Hyperloop One: CEO Rob Lloyd spoke during AutoMobility LA about Hyperloop One and meeting on-demand autonomous networks that will redefine cities and rewrite the rules of transportation for the future. The former Cisco executive became the startup’s CEO last year in September. The startup company, inspired by Tesla CEO Elon Musk’s 2013 concept design, is creating a tubular form of high speed transportation that can go 700 mph. On Friday, the company settled a lawsuit with Brogan BamBrogan, a co-founder and chief technology officer, and three other former executives, over alleged wrongdoing by management and investors.