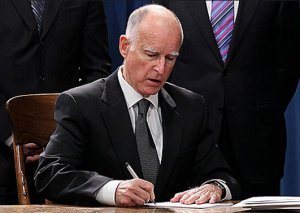 California Governor Jerry Brown celebrated National Plug In Day his own way – by signing six bills promoting electric vehicles and alternative technologies in the state. There was some very good news for those building the charging infrastructure – one of them being Senate Bill 454 (SB 454), which adopts the Electric Vehicle Charging Stations Open Access Act. This means that the architecture is open for charging infrastructure deployment. While companies like ChargePoint have been pushing hard for proprietary networks to be the standard, California is adopting an open system for electric vehicle charging payment. Drivers will be able to pull up at any charging station and use their credit card to fuel their car; they’ll no longer be required to search for the limited number of charging stations that they have an account with.

Assembly Bill 1092 (AB 1092) addresses another tough issue for expanding the charging infrastructure – multi-family dwelling and non-residential development. The California Building Standards Commission and the Department of Housing and Community Developments are now required to develop standards for installing the charging stations.

Fans of the carpool lane stickers were probably thrilled to hear that the High-Occupancy Vehicle (HOV) extends access for low-emission and zero-emission vehicles until 2019; AB 266 and SB 286 extend white HOV lane stickers for battery electric vehicles and the green stickers for plug-in hybrids, respectively.

Some of these signed bills appear to be influenced by the state’s ambitious target of having 15.4% of new vehicles sold in the state to be zero emission (battery electric and hydrogen fuel cell) or plug-in hybrid vehicles by 2025. The state thinks that will bring more than 1.4 million zero emission and plug-in hybrid vehicles onto California roads by that year. A study by the state’s Air Resources Board is even more optimistic than that – the agency expects nearly 100% of all light-duty passenger vehicles sold in the state to be zero-emission vehicles by 2040.