Two days before the 40th anniversary of Earth Day, the oil drilling rig Deepwater Horizon exploded and sank. The explosion and subsequent fire on April 20, 2010, caused the sinking of BP’s oil rig, the deaths of 11 workers, injuries to 17 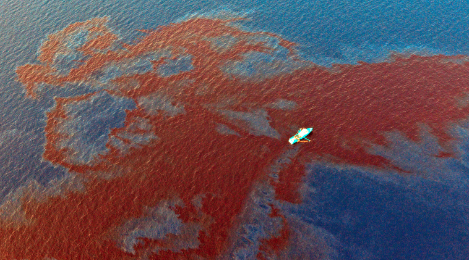 other workers, and the spilling of four million barrels of oil over an 87-day period. The catastrophe in the Guif of Mexico, approximately 41 miles off the coast of Louisiana, led to British oil major BP, the Swiss drilling contractor Transocean, and oil field services company Halliburton, struggling to bring the damage under control.

The spill cost BP over $65 billion in criminal penalties, civil claims, and clean-up costs. More than 47,000 people worked on the response effort in the summer of 2010. It became the biggest oil disaster ever in the US. Scientists estimated 184 million gallons were spilled — 18 times the amount spilled by the Exxon Valdez in 1989. Tourism was hit hard, along with the prime fishing grounds in Louisiana. For the oil industry, the Deepwater Horizon explosion represented the largest public relations crisis in its history. As the company said in a statement: “The accident and spill forever changed BP.”

What about the environmental and safety impact? Endangering marine wildlife and throwing local ecosystems out of balance came from it. For anyone viewing news coverage of the disaster, oil soaked birds and beaches slick with crude were typical to see.

PAH, or polycyclic aromatic hydrocarbons, was found up to eight miles from the Deepwater Horizon and was later found to be causing cardiac arrest in fish. Pockets of methane led to oxygen-starved zones, which caused marine life to smother. Large numbers of fish kills in the area were reported; and utero infections, fetal issues, and late-term pregnancy failures in dolphins. The Audubon Society reported that more than one million birds died as a result of the disaster.

The oil spill’s most lasting effects have been in deep-water zones, wetlands, and in the the population of larger marine animals like turtles, whales, and dolphins with long lifespans, according to Donald Boesch, a professor of marine science at the University of Maryland Center for Environmental Science. Boesch was appointed to the National Commission on the BP Deepwater Horizon Oil Spill and Offshore Drilling by President Barack Obama. Taking a look at a photo gallery from NPR will show you what it looked like and how the impact is still being felt.

The US is far from enacting fail-safes against a disaster like the Deepwater Horizon happening again; though the Obama administration did enforce rules coming from oversight agencies after the BP disaster. But it’s far from over. An even larger oil spill took place gradually over several years. The US Coast Guard was finally able to contain the Taylor Energy oil spill into the Gulf of Mexico last May that had gone on for more than 14 years. It started in 2004 after Hurricane Ivan triggered an underground mudslide that caused Taylor Energy’s oil platform to topple and sink. The leak is thought to have topped the 2010 BP disaster by more than 241 million gallons, potentially making it one of the largest – and slowest – oil disasters ever recorded.

The Trump administration has been supporting offshore oil drilling. The Department of the Interior will be allowing offshore exploratory drilling in about 90 percent of the outer continental shelf (OCS) acreage, under the National Outer Continental Shelf Oil and Gas Leasing Program for 2019-2024. The oil and gas sector in the region is expected to open up new opportunities to the market once challenges have been addressed and the program is belatedly approved and enacted.

Two other energy and environmental disasters had their share of impact over the past decade. Japan’s Fukushima Daiichi nuclear disaster on March 11, 2011; and the Volkswagen emissions scandal, also known as Dieselgate, that kicked off in September 2015, eventually overshadowed the Deepwater Horizon oil crisis. While Covid-19 has taken over this year, once its contained and vaccines become common, attention will inevitably go back to climate change, air pollution, and avoiding future energy disasters that bring heavy costs to human, marine, and animal life, the global economy, and clean transportation.

And in other news……….
Speaking of Earth Day, now it’s time for the 50th anniversary on April 22. An anniversary event started on Sunday, April 19 to kick off Earth Week with a virtual stage of high-profile speakers, including public officials, activists, scientists, and performers. Event participants include Al Gore, Senator Elizabeth Warren, Bill Nye (the Science Guy), NRDC president and CEO, and former EPA administrator, Gina McCarthy, and actors such as Joseph Gordon-Levitt. During April 22-24, millions of people around the world are going online for a three-day mobilization to stop the climate emergency.

How will clean car rules be affected by the Covid-19?  Climatewire’s feature (subscription required) doesn’t offer any real surprises. Global auto sales are gone for now, including electric vehicles. Tesla stock is doing alright with its China plant now open and running, and the Model Y coming out soon. Another interesting fact is that zero emission vehicles now make up 10 percent of new vehicle sales in Los Angeles County. Mayor Eric Garcetti wants to see that go up to 30 percent by 2028, by the the summer Olympics come back to the city. Overall, one quote in the article says it all on the state’s ZEV program: “California is aiming for 100 percent electrification of light-duty vehicles and most heavy-duty vehicles,” said Dan Sperling, director of the Institute of Transportation Studies at the University of California, Davis. “So this current lapse in the market is of great concern.”

Making improvements to EV battery supply chain:  Questions always come up about where electric vehicles are getting their batteries — and the environmental and economic costs of making it happen. UC Berkeley’s Center for Law, Energy & the Environment (CLEE) and the Natural Resource Governance Institute (NRGI) are conducting a stakeholder-led research initiative focused on identifying strategies to improve sustainability and governance across the EV battery supply chain. The massive global EV deployment has been raising concerns over the sustainability of the battery supply chain, from mining impacts to vehicle carbon emissions. CLEE and NRGI have prepared a background brief to address key questions.

Market analyst gives auto industry forecast during crisis:  Trucks.com conducted an interview with Adam Jonas, the transportation industry analyst at Morgan Stanley Research, on the state of the auto industry and transportation since the Covid-19 pandemic became a global crisis. A few of the interesting findings include: