Last week, the American Council for an Energy-Efficient Economy (ACEEE) released its 18th annual comprehensive environmental ratings for vehicles. As you can view in this list of the 12 Greenest cars in 2015, battery electric vehicles did the best, taking the top three spots.

The Smart ForTwo Electric Drive took No. 1 for the second year in a row, this year taking the highest Green Score ever. Plug-in electric vehicles took six out of 12 places on this year’s list. The Toyota Prius did well this year with its Prius C taking 4th place and the Prius liftback, and Prius Plug-in jointly took No. 6. The Nissan Leaf finished in fifth place.

ACEEE assigns each vehicle a Green Score that incorporates lifecycle greenhouse gas and criteria pollutant emissions. The announcement of this year’s winner coincides with the release of ACEEE’s brand new greenercars.org website that will now offer subscription-free access to all vehicle scores from model year 2000 and later. Another new feature this year is analysis of where the electricity powering the electric vehicle comes from. “A car that is charged using electricity generated from natural gas or renewables is going to have significantly less impact on the environment than one charged on a coal-heavy grid,” said ACEEE lead vehicle analyst Shruti Vaidyanathan.

ACEEE also looks at the other end of the spectrum – acknowledging vehicles that are the least friendly to the environment. Number one on this year’s list is the Dodge Ram 2500 (Class 2b), followed by the Chevrolet/GMC G2500 Express/Savana cargo conversion vans.

Looking at the selection of “greenest of the green car” awards released around this time of the year begs the questions: What is a green car? What makes it the best? Overall, the BMW i3, Nissan Leaf, and Volkswagen models performed very well in the rankings.

Fuel economy is one that always comes up in consumer polls, fleet acquisitions, and government rating systems. Take a look here at 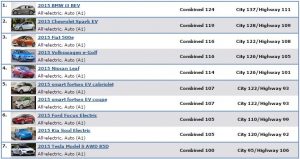 Fueleconomy.gov’s Top Ten EPA-Rated Fuel Sippers (2015); these are based on fuel economy measured in miles per gallon equivalent (MPGe) for electric vehicles where 33.7 kilowatt hours is equal to one gallon of gasoline. The combined rating is weighted at 55% city and 45% highway driving.

Volkswagen has seen positive results as well, with the Golf product lineup taking Green Car Reports’ Best Car to Buy for 2015. The compact five-door Golf, now in its seventh generation, is both lighter and more spacious inside. The Volkswagen e-Golf, the German automaker’s first-ever all-electric car and zero-emission vehicle, also helped bump it up on the list. The Volkswagen Jetta Diesel and Passat Diesel were among the top 10 best-selling green vehicles in the US last year.

The Nissan Leaf didn’t take any of the top spots this year, but finished well in the top 10 on several lists. It was the top-selling electric car in the 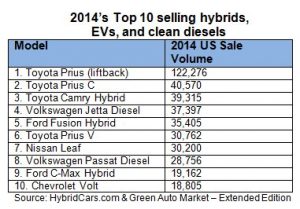 US during 2014, whether or not the Tesla Model S started stealing the thunder. As you can see on this top 10 list of 2014’s best-selling hybrids, electric vehicles, and clean diesel cars, the Leaf isn’t selling anywhere near the volume of the Toyota Prius liftback (the non-plug-in hybrid version of the Prius), but it is far ahead of the second highest-selling plug-in model from last year, the Chevrolet Volt. 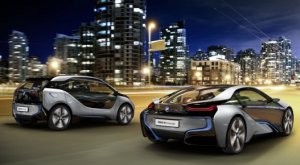