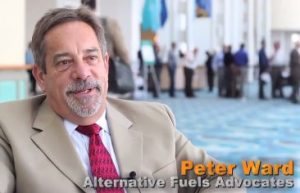 Travis McGee may have set the tone for baby boomers entering the retirement phase of their lives. McGee, the lead character in a series of popular John D. MacDonald mystery novels published in the 1960s-to-1980s, lived on his boat The Busted Flush in Fort Lauderdale. McGee would get hired to do private detective work – or what his business card described as a “Salvage Consultant” – to retrieve stolen money and goods. Between those gigs, he lived as a “beach bum” on his boat, and would take his retirement “in installments.” When he needed the money, or something lively to do, he would take the job. Today, that might mean a boomer takes an early retirement but continues on with what they’ve always wanted to do – taking their retirement “in installments.”

I asked that question of Peter Ward, Principal at Alternative Fuel Advocates, at an ACT Expo conference about why he’d left his position at the California Energy Commission but had continued in the clean transportation space. “I was infected with the alternative fuel passion many, many years ago,” Ward said in this Automotive Digest video interview. That started during the OPEC oil embargos in the 1970s – the “petroleum shocks.” Don’t be surprised to see Ward at future ACT Expo and other industry events, and to hear about projects he’s working on in the Sacramento area.

Rick Sikes, Fleet Superintendent for the City of Santa Monica, and Keith Leech, Fleet Manager for the City of Sacramento, announced their retirements in January. They’ve been well known at NAFA Fleet Management Association and for making significant contributions to clean transportation. Sikes has played a leading role organizing AltCar Expo in Santa Monica since its inception in 2005. Leech served as President of the Sacramento Regional Clean Cities Coalition. I saw Sikes at the Long Beach Clean Cities meeting last month, where he confirmed that he’ll be staying active in the community. I also get the impression Leech will do the same in Sacramento.

One of my colleagues will be retiring from an electric utility this spring, and will be starting up as a consultant supporting growth in electric vehicle (EV) charging. Multi-family dwellings, such as apartments and condos, is where he’s most concerned that EV charging faces its biggest obstacles and opportunities; that’s where he’ll bring his skillset and peer network to make a difference.

When I’ve talked to colleagues, friends, and family members about their retirement plans, I’m usually told about the next phase of their working lives. That could be as a consultant working on projects in between travels; or a contract worker for their previous employer contributing their expertise; or a substitute school teacher; or a writer finishing that book they’ve put off all these years; or a student finishing up that degree or certification to go in a career direction they’ve always wanted to pursue. There’s also the option of continuing to work in their business, never really retiring.

I recently asked Automotive Digest Publisher Chuck Parker to share his thoughts on what it’s like to be a seasoned industry veteran who won’t be retiring anytime soon. That led to him writing a commentary in his usual colorful style, called “Top Twenty Anti Retirement Action-ables to Be ‘Live’ & Remain Alive.” That will be published soon in Automotive Digest, but here are two of them………

Now that the tail end of the baby boomer generation has turned 50 as of last year, researchers have been tracking how this generation has been reinventing their careers in phase two – or phase three. AARP (formerly the American Association of Retired Persons) fills its monthly magazine with celebrity profiles where Jeff Bridges, Meryl Streep, and Bob Dylan continue loving their work and taking on projects. Clint Eastwood, 84, didn’t win an Oscar for “American Sniper,” but we do expect him to make another movie – he loves doing it. AARP tracks demographic research and finds that the fastest-growing segment in the workforce will be 65-to-74 year olds; with some Americans working well into their 90s.

I started my practice, LeSage Consulting, last year in January at age 50. I was waffling over it when my significant other, who at age 51 had started a two-year master’s degree program in project management, gave me a reminder. I had committed to keeping my word, she said. (“Actions speak louder than words,” as my father used to say). So I took that plunge and haven’t regretted it. I won’t be getting any younger.

Nobel Prize winning chemist (and champion of vitamin C as a healing agent) Linus Pauling offers a telling story – right up there with Travis McGee. In 1973 he co-founded a California research institute devoted to the study of the health effects of vitamin C and other nutrients. He conducted research there until his death from cancer in 1994, at age 93. I’ve always had a hunch I’ll end up traveling down a similar path as Linus Pauling, Chuck Parker, and Travis McGee.

Editor’s note: Changes to LeSage Consulting website and Green Auto Market will be announced within the next couple of weeks.