Tesla speeding up European plant:  Rumors are floating that Tesla may be able to beat the timing on its second plant opening in China with its Berlin vehicle manufacturing facility. Some of those working on the German plant are bragging they are three months ahead of where the Chinese plant was at this time last year. You can also view a video on 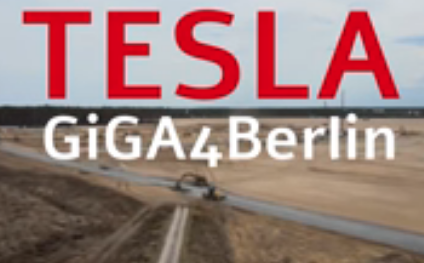 the plant’s construction, with the nickname of GiGA4Berlin. Tesla continues to work quickly through the COVID-19 crisis and inner turmoil over management turnovers. One theory is that CEO Elon Musk and team are learning big lessons from crafting two vehicle plants and one battery factory to produce four models to production scale (with the fifth, the Model Y, slowed down for now with some production issues). That lesson would be how to standardize building the production plants and speeding everything up. Tesla is on its way to become a true global automaker serving the biggest markets: North America, China, and Europe.

Automotive Digest going away, welcoming new media platform:  Automotive Digest will soon be closed down for good, sad to say. But Chuck Parker will be staying in the game, having recently launched his Fixes and Solutions new media content platform. His new title describes it well: Editor, Publisher, Strategist, & Fixer. The focus here is on identifying and exploring the problems, issues, and obstacles along with possible fixes and solutions that are shaping the country, society, and the world — and not just the automotive industry. It’s also a good space for experts/analysts to voice their concerns, as editorial contributions are being accepted.

What does that look like? A few topics featured in its published articles tell the story…….. How robotics startup Starship Technologies is making its way through COVID-19 and building up its fleet of autonomous sidewalk delivery vehicles……… Federal courts are starting to protect laws that the Trump administration has been dismantling over fossil fuels’ impact on the climate…………. Can leaders from the US and Europe seize the moment to take on the challenges of stopping pandemics, solving climate change, and dealing with inequities of race and economies?…….. How online therapy app, Talkspace, has given counselors, therapists, and medical professionals a new functional means to delivering therapy without being in the same room or office with the client……. and much more.

China investing heavily in coal power:  China is in the process of undercutting all the capital and resources invested in clean energy and electric vehicles. The country permitted more new coal-fired power plants in March than it did in all of 2019. It comes right after a surge in coal plant construction last year. China already consumes more than half of the world’s coal. The country has almost as much new coal generation in planning or construction (206 gigawatts) as the US has in operation (235 GW at the end of 2019). It came from the economic turmoil the country started experiencing a decade ago, with the government putting investing huge sums through state-owned enterprises, with much of it going into coal-fired power.

Zobel heading hydrogen council:  The California Hydrogen Business Council (CHBC) has named Bill Zobel, a prominent figure in natural gas vehicles, as the executive director of the organization. Zobel joins CHBC after over ten years at Trillium, where he served as vice president of business development and marketing. During those years, Zobel helped to diversify the company’s alternative fuel portfolio to include hydrogen refueling in order to meet changing market conditions, customer needs, and company goals. He also worked to secure two premier hydrogen projects in the transit sector with the Orange County Transportation Authority and Champagne-Urbana Mass Transit District.

Clean Transportation group looking for active members:  If you’re a LinkedIn member, come by the Clean Transportation group. I’d started it a few years ago, but let it go dormant. Like other LinkedIn groups, it’s a good platform for telling the story on projects you’re working on, and critical issues facing the future of clean transportation, alternative fuels, and the future of transportation. Another one to check out is Sustainability Working Group, which delves into how sustainability is embedded in organizations and the impact this has on environmental stewardship, stakeholder well-being, community development and shared value. And one more thing, check out my article published in LinkedIn, “What’s the state of the economy as the ‘new normal’ drags on?”

Hyundai and Kia tapping into heat pump EV efficiency:  Hyundai Motor Company and Kia Motors Corporation released details of their innovative heat pump system, deployed in Hyundai and Kia’s global electric vehicle (EV) line-up to maximize their all-electric driving range in low temperatures. It’s extending per-charge driving range by tapping into waste heat to warm the cabin for passengers traveling through cold weather. It was first tied out in the first-generation Kia Soul EV, which used its compressor, evaporator, and condenser, so that the heat pump was able to capture waste heat given off by the vehicle’s electrical components, recycling this energy to heat the cabin more efficiently.