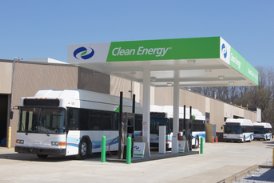 Public transit buses operating in the U.S. are showing some impressive numbers for alternative fuels and advanced vehicle technologies. The American Public Transportation Association (APTA)’s annual Earth Day report in April said that 41.3% of public transportation buses use alternative fuels or hybrid technologies (as of the start of 2014); that’s broken down into 16.9% hybrid, 16.7% natural gas, 7.4% biodiesel, and 0.3% other alternative fuels including propane and hydrogen. Electric buses are starting to take off with transit agencies, as well.

The Massachusetts Department of Transportation (MassDOT) will be investing in hybrid and natural gas vehicles. MassDOT’s board of directors approved a $222.2 million contract for 325 new replacement buses for the MBTA fleet – 40 of these will be 40-foot low floor hybrid and compressed natural gas (CNG) buses to begin in July 2016. The buses are coming from New Flyer, Inc., and are being funded with 80% Federal Formula funds and 20% Massachusetts Bay Transportation Authority (MBTA) Revenue Bond funds.

MassDOT’s alternative fuel strategy has been similar to one adopted 15 years ago in California, where several cities are now operating hybrid and CNG buses. About 60% of California buses now run on CNG, compared with 17% nationwide.

California’s Air Resources Board (CARB) has mandated a switch to “zero-emission” buses by 2040, creating a challenge for suppliers of hybrid and CNG buses to find a market in the state. As of March, there were 22 battery-powered electric buses and seven fuel-cell powered buses in California transit fleets, according to CARB. One challenge with electric buses is range – about 155 miles typically on a charge versus about 300 miles on a fueling for diesel- or natural gas-powered buses. Fuel cell buses have a much longer range than electric buses, but the lack of hydrogen fueling infrastructure limits range.

In response, the California Natural Gas Vehicle Coalition has proposed expanding the definition of “zero-emission vehicles” to include buses powered by renewable natural gas, which comes from cow manure or decomposing organic matter in landfills. The payoff is enormous, according the coalition. While traditional natural gas offers a reduction in greenhouse gases of about 15% to 20% over diesel, renewable natural gas offers a reduction of about 90% over diesel, the coalition says.

The charging/fueling cost is different, too – with a natural gas bus costing an average of $27,000 to fuel annually and an electric bus costing about $10,500 for charging. Fuel cost savings is helping to make CNG, hybrid, and electric buses more attractive when compared to diesel-powered buses.