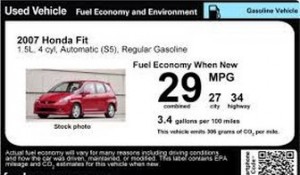 Looking for a profitable used vehicle market segment to reach? How about green cars – hybrids, electric vehicles, and fuel efficient vehicles? Franchised and independent dealers are seeing a lot of used inventory on the market today, and some of it, especially trucks, is seeing strong pricing. What we’re seeing though, such as in Manheim’s latest report, is that dealers are doing well by selling lots of used vehicle the right way. Prices might be down on small, fuel efficient cars and hybrids, but all things considered, they’re not bad – and selling a lot of them can be profitable.

There are two interesting announcements from last week that speak to the issue – one is that Nissan has added its Leaf electric car to its certified pre-owned vehicle list; and the other is an online tool for used cars rating fuel efficiency and emissions from the US Dept. of Energy (DOE) and Environmental Protection Agency (EPA).

Certified Leafs will get an extended warranty of seven years or 100,000 miles on both the electric system and powertrain. To be considered, the used Leaf must be less than five years old, have fewer than 60,000 miles, and have at least nine of 12 bars of battery capacity remaining on the gauge. It also needs to have a clean Carfax history report, and pass an inspection where 167 separate items are checked. Two warranties on the battery pack will remain in place – eight years or 100,000 miles, and five years or 60,000 miles, with a few performance indicators being checked on each warranty. The new certified program adds to the protections.

For the DOE and EPA offering, dealers and consumers can now place a used car label based on fuel economy and emissions performance. It’s a free online tool allowing for creation of a consumer-friendly label that lists gas mileage and CO2 emissions levels of used vehicles sold in the US since 1984.