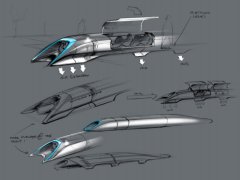 Hyperloop:  Telsa CEO Elon Musk stirred up a lot of curiosity over the past year for the unveiling of his Hyperloop high-speed rail concept yesterday. It boils down to flying through a steel pipeline; take a look at this 57-page report. It’s a concept that won’t necessarily be carried out by any of Musk’s companies such as SpaceX, but it is intriguing. Musk says he is releasing the designs as an open source project in hopes of optimizing the design and bringing down costs.

The high-speed transit solution could go from Los Angeles to San Francisco in 30 minutes and would cost $6 billion – compared to the $68 billion budgeted for the state’s high-speed rail project. It would travel along the state’s I-5 and I-580 highways and reach top speeds of 760 miles per hour. The capsules, or pods, could carry up to 28 people and each person could bring two bags. The trip would cost them about $20 one way. Musk recommends that it be built as a low friction suspension system traveling with a cushion of air from the pod using the same air bearings principle used in an air hockey table, instead of wheels. His team thinks that a battery used to accelerate the pod would be drawn not from the battery pack (that battery would circulate air in the pod); instead an external linear electric motor with a round induction motor, similar to the one used in the Tesla Model S, would deliver that power. Perhaps Tesla would provide an electric motor? There is probably some potential business opportunity for Musk and his companies — similar to Google funding and delivering driverless Toyota Priuses to states testing out autonomous cars. There’s got to be some technology applications that Google and Tesla can provide.

Neapolitan Express is leading a campaign to bring natural gas vehicles to food delivery vehicles in fleets across the country: Everything is powered on natural gas, instead of propane for food heating and gasoline or diesel for the truck’s engine and the motor powering air conditioning and other features. The food truck produces 70% less carbon emissions and reduces fuel costs by 60% over gasoline and diesel-fueled versions. Company owner Max Crespo unveiled the Neapolitan Express in February alongside New York Mayor Michael Bloomberg and Clean Energy Fuels Corp. founder T. Boone Pickens. In partnership with Clean Energy Fuels, Crespo is now rolling out the concept across the country, according to ClimateWire (subscription required).

Attention Fleet Managers — Sell green vehicles as part of GHG emissions reduction strategy:  Major aerospace company Northrup Grumman just released impressive numbers on reaching its greenhouse gas emissions reduction targets – the only problem is that it had nothing to do with transportation. The company reduced GHG nearly 27% in three years – two years ahead of plan. How was this accomplished? An environmental sustainability program that covers facilities, engineering, and manufacturing efficiency projects, a green information technology strategy, real estate optimization, renewable energy, and ecosystem conservation. Not a word was said about its fleet vehicles. Fleet managers have been thinking about installing electric vehicle charging stations on campus and looking at green vehicles like its fleet management counterparts, but so far that hasn’t happened.