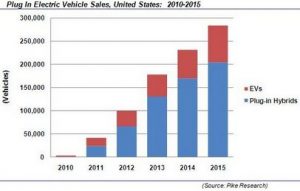 As reported lately in Green Auto Market and several major media sources, it’s been a tough year for green car sales. Hybrid sales were down 18.5% in the first half of this year compared to last year. Plug-in hybrid electric vehicles had it much worse – plunging 33.7% versus a year ago. Battery electric vehicles have bucked the trend, with the Tesla Model S, Mercedes B-Class Electric, and the BMW i3 doing well in July. Sales increases reported by Tesla haven’t been enough to lighten the mood.

Hydrogen fuel cell vehicles, especially the upcoming Toyota Mirai, are getting much attention this year and impressing some with California’s (and other states’) commitment to zero emission vehicles (ZEVS). The numbers aren’t there yet in hydrogen fueling stations or car sales. Hyundai has sold just 17 Tucson FCVs this year in the U.S. Toyota is investing a lot into its upcoming Mirai FCV. Pre-orders are being placed now for deliveries starting this fall.

For electric vehicles, there’s been concern that federal and state incentives need to increase to gain more sales appeal. The July total, only one-third of last year’s sales, may reflect the June 30th end of Georgia’s generous income-tax credit for purchasing ZEVs in the state.

Then there’s the overall economic climate. Sales started softening in June and continued into July, with low gasoline prices and cheap small cars and crossovers with strong fuel economy driving much of the interest.

Sales have dropped quite a bit for the Nissan Leaf, with a seven-month total this year of 10,990, one-third less than the 15,755 Leafs sold in the first seven months of 2014. Some of this likely has to do with a refreshed Leaf coming out in the 2016 model year, with a battery range that could be 25% higher. There’s talk out there that Nissan may go the way of the 2012 Toyota Prius family, with more versions of the Leaf rolling out in 2016 or 2017. One of these might be a crossover Leaf along with the five-door hatchback that you see now out on the road.

BMW CEO Harald Krueger has said that an electrified crossover will be coming out in the i Series. BMW may also add a big battery-electric SUV to its main brand in a direct challenge to the Tesla Model X sedan. BMW is also said to be looking into working with Apple on the new high-tech vehicle the technology giant wants to develop.

The Chevrolet Volt appears to be very much affected by a new model coming to dealerships this fall. In July, Chevrolet reported a year-to-date sales figure of 6,935 for 2015, versus 10,635 for the same period during 2014. Sales did increase to over 1,000 during the past three months, right after seeing four months of sales at less than 1,000 units. General Motors and its Chevrolet dealers may have been aggressively attempting to sell off the 2015 models before the 2016 model gets closer to coming to market.

The Volt may be going up to 53 miles on battery power with the revamped model – 40% more in battery range than the current model. It will also have a more power engine and, for some models, a fifth “seating position” to increase its appeal.

Tesla Motors is counting on its Model X building up its global sales. During its second quarter earnings report, the company said that its full-year delivery forecast will be coming down from 55,000 to between 50,000 and 55,000. That may come from a delay in production of the Model X.

Tesla will manufacture the Model X on the same general assembly line as its Model S sedan at the factory in Fremont, Calif. That could could slow down overall production if there are problems that come up during the ramp-up of the new product, according to CEO Elon Musk. Seeing strong sales increases in the Model S has encouraged Tesla to increase its production. The automaker reported producing a record 12,807 vehicles in Q2, which beat its goal of 12,500 units.

One of the big hopes for plug-in sales is coming through more affordable cars with more miles between charges. Tesla is placing a lot of its strategic plan on rolling out its $35,000 Model 3 in 2017 (which will include advanced batteries being manufactured at the new Gigafactory in Nevada that will power the car for 200 miles on a single charge). General Motors has high hopes for the Chevrolet Bolt is expected to make it 200 miles on a charge and start at $30,000 when it rolls out in 2017. Tesla and GM are putting a lot of hope on these cars, which face the fundamental challenge all of these electrified vehicles must address:  getting more consumers to overcome concerns about investing in a new technology.