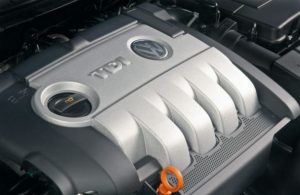 As covered last week in Green Auto Market, China is setting the pace on where sustainability and emissions reporting is heading in the auto industry. Beyond incentivizing electric vehicle sales, the Chinese government is setting the strictest standards on reducing air pollution.

Regulators around the world are getting tougher on automakers after a series of cheating scandals on fuel economy and emissions, with China set to become the strictest, said Ford CEO Mark Fields. While stricter standards are being adopted around the world on greenhouse gas emissions and fuel economy, China will be the toughest regulatory regime over the next five years “given some of the societal factors around air pollution,” Fields said.

Fields spoke to reporters on the eve of the Beijing Auto Show, China’s largest car show. Ford faced a reporting scandal of its own in 2013 and 2014, when it twice lowered the mileage ratings of several hybrid models. Fields said that Ford is supportive of Europe considering on-road testing for emissions and would comply if China follows suit.

VW settlement in U.S.: On Thursday, VW agreed to a tentative plan with the U.S. Environmental Protection Agency and the California Air Resources Board  to buy back or repair 500,000 diesel-powered cars sold in the U.S. Consumers now have the choice of whether to sell their vehicles back to Volkswagen or get repairs. The deal includes “substantial compensation” for owners of cars powered by two-liter “clean diesel” engines that were fitted with software to cheat emissions tests, U.S. District Judge Charles Breyer said during the hearing in San Francisco. VW will be required to invest funds to “promote green automotive” initiatives and establish an environmental remediation fund to offset the years of cars putting out nitrogen oxide emissions at harmful levels.

The judge issued a gag order and scolded parties for leaking previous details to the media as more finalized details on the settlement will be released later affecting the VW, Audi, and Porsche brands. VW still faces as many as 50 attorney general fraud cases for false advertisement, having made claims that its vehicles are a clean alternative to hybrids. VW also faces lawsuits from dealerships and customers.

Recall in Germany: The vehicle recall related to diesel emissions management software has added two more automakers – Daimler and General Motors – in a German government ruling. That government has ordered recalls and testing for NOx emissions in diesel cars for VW, Audi, Porsche, and Daimler’s Mercedes-Benz and GM’s Opel brands with about 630,000 diesel cars being recalled for a software fix. BMW was not part of the recall. German motor transport authority KBA had done extensive testing on diesel cars and determined automakers have been using a legal loophole allowing them to throttle back emissions treatments under certain circumstances, with OEMs claiming that’s been done to protect engines.

The decision in Germany is yet another challenge VW is facing in global markets. VW Group is recalling 8.5 million cars in Europe that are among 11 million diesel cars sold worldwide by its VW, Audi, Porsche, Skoda, and Seat brands equipped with emissions-cheating software. The U.K. government just released results after testing 37 car models on NOx emissions reporting; it found that only VW has been using so-called defeat devices.

Mitsubishi mileage scandal: Mitsubishi has admitted manipulating fuel economy ratings for its vehicles sold in the Japanese market. The company said it had overstated the fuel efficiency of 625,000 cars. Media outlets have reported that the Japanese automakers had submitted misleading mileage data on its i-MiEV electric car, which is also sold overseas. The automaker is also suspected of using non-Japanese test methodology on its RVR, Outlander, Pajero, and Minicab MiEV models.

The scandal expanded on Friday as the U.S. National Highway Traffic Safety Administration said it was seeking information; it may affect at least one more model than disclosed and likely several others. In Japan, the government may mandate that Mitsubishi will have to reimburse consumers and the government if investigations find the vehicles were not as fuel-efficient as claimed.

Daimler diesel emissions: Along with its recall in Germany, Daimler AG is facing more scrutiny in the U.S. market. On Thursday, the company said it is conducting an internal investigation of its certification process for diesel exhaust emissions at the request of the U.S. Justice Department.

The latest action stems from an EPA request in February for information from Daimler coming from a lawsuit filed by U.S. Mercedes owners. In early April, owners of U.S. Mercedes diesel cars filed a new class action suit by U.S. law firm Hagens Berman, which had already filed a complaint in February. The suit claimed its vehicles likely contained a “defeat device” used to cheat emissions testing, an accusation that Daimler denied.

Daimler said the lawsuits “are considered to be without merit and Daimler will defend itself against them with all available legal means.” The automaker has committed to cooperate fully with U.S. government investigations.