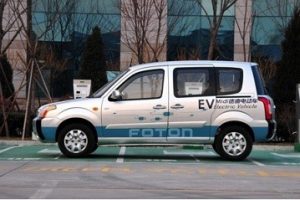 How China has become the largest plug-in electric vehicle market in the world; and how Chinese investors have put millions of dollars into U.S. companies with electric drive technology.

Editor’s note: This is the introduction to an upcoming $15 market report I’m writing that will include sales figures, pricing information, incentives, and specs on electric vehicles being built in China; and a section of the report focused on U.S.-based companies serving the Chinese EV market.

World’s largest auto market
China has experienced tremendous economic growth in the past 30 years, with workers moving from farmlands and small towns to metro areas for jobs and buying their very first cars. Ten years ago, Chinese consumers purchased about six million new vehicles annually, but last year that number had increased to 21.1 million passenger cars (sedans, SUVs, and minivans); that made for about a quarter of global sales and a huge share of profits for major automakers.

Global automakers see China as the largest and most important market for manufacturing and sales, and have created joint ventures with government-backed companies to expand their global presence. General Motors sold 35% of its new vehicles in China last year through GM China and its joint ventures. GM’s Buick brand is heavily invested in that market – selling 919,582 Buicks last year in China, versus 228,963 in the U.S. GM China has committed to bringing in 10 “greener” vehicles into its product lineup in the next few years, including the Cadillac CT6 Plug-in Hybrid Electric Vehicle.

In 2015 and into 2016, automakers and their dealer networks faced downturns and instability in sales in the Chinese market. A plunging stock market in the first part of 2016 and rising house prices have had their economic impact on car sales. Dealers in China have become reluctant to put too much vehicle inventory on car lots amid concerns about the broader economy and stock market.

In China, the government remains committed to growing plug-in hybrid and battery electric vehicle production and sales. Air pollution in Beijing and other major Chinese cities have been driving the incentives and sales for more electric vehicles (EVs) to make it to China’s increasingly congested roads. As passenger and commercial vehicles pour into cities, the air pollution has been getting worse – as was observed during the 2008 summer Olympics in Beijing.

China’s new energy vehicle sales have seen rapid growth in the past two years thanks to these incentives. The country finished in first place for global EV sales last year. China made up 34.2% of global plug-in electric vehicle sales in 2015 with 176,627 sold; in the U.S, 115,262 plug-ins were sold last year. In China, EV sales have been heavily subsidized by the national government and local branches. There’s been an assumption by global automakers that the market’s EV sales will continue to grow – enough for major OEMs to invest heavily in the market, many times in joint ventures with Chinese companies.

Chinese automaker BYD says car shoppers are more interested in owning an EV due to the air pollution in China – and this unpleasant reality is making for an effective marketing message. One of BYD’s online ads shows a man in a cloud of pollution calling for help from China’s fabled Monkey King hero.

Government policies have given Chinese investors and Chinese companies the confidence to sink millions of dollars into U.S. companies with electric drive technology. While some of these vehicles may end up in the U.S. and other global markets, Chinese investors want to focus primarily on the China market. Nissan, Tesla Motors, and other automakers would tend to agree, and are investing heavily in the China market to grow EV sales well beyond the U.S. and Europe. Chinese automakers BYD, BAIC, Chery, SAIC, Zotye, and others, have EV models in pre-production and several EV models on the market being sold by dealers; their EVs are explored in this study.

Will subsidies go away?
Subsidies for the new energy vehicles have started to decline, but they’re not going away any time soon. One assessment states that about $4.56 billion in local and central government incentives were spent last year. The government’s five year’s plan will see subsidies in 2017 and 2018 reduced by 20% from 2016 levels; and another 20% will be cut in 2019 and 2020.

There have been media reports made of fraudulent sales transactions reported in 2015, and government agencies are conducting investigations. EV sales numbers tripled last year in China, and the data may have been “padded” with some of the EVs being counted twice in the total. Another factor analyzed by global auto analysts comparing EV sales around the world is that China’s new energy vehicle policy counts low-speed, neighborhood electric vehicles in its sales figures. Chinese automaker Kandi has been offering its small, low-speed EV for retail sale in China and for its carsharing service; but its sales numbers have been low so far. Whatever findings end up being adopted and reported, China is expected to remain the leading EV market ahead of the U.S. and Europe.

A decade ago in the U.S., EVs were a hot commodity for venture capital firms in Silicon Valley and beyond along with other cleantech sectors. Up until about four years ago, you could attend auto shows and fleet events and check out a myriad of plug-ins from companies no longer in business including Fisker Automotive, Coda Automotive, Bright Automotive, and Aptera Motors.

In the early days of EV mass market sales from 2011 to 2014 in the U.S., automotive analysts and EV advocates were pleased to see strong numbers coming from the Nissan Leaf, Chevrolet Volt, Tesla Model S, Toyota Prius Plug-in, and BMW i3. Overall EV sales numbers in the U.S. began declining last year for reasons yet to be clearly understood. Cheap gasoline may have had something to do with it, although gas prices are thought to have more impact on hybrid sales than EVs.

The fascination may be over for early adopters and consumers who needed to be first in line for cool new technologies like smartphones and EVs. Executives at global automakers expect EV sales to eventually increase as consumers and fleets become accustomed to the new technologies – and lithium batteries are capable of 200-plus miles or more per charge while pre-incentive sticker prices on EVs come down to $35,000 or less. They also see government fuel economy and emissions mandates in the U.S. and Europe being a big driver behind their product planning, which includes a rich line of new EV models in the next few years.

While the EV sales numbers from the past two years may not stay high long term, most automakers do see China as the most important market to secure a solid platform for manufacturing and selling EVs. The numbers have been impressive so far this year. According to the statistics compiled by China Association of Automobile Manufacturers (CAAM), for the first two months of 2016, the production and sales of new energy vehicles reached 37,937 units and 35,726 units respectively, both increasing 1.7 times year on year. The production and sales of BEVs reached 27,850 units and 24,835 units, increasing 2.6 times and 2.7 times year on year; and such figures for PHEVs were 10,087 units and 10,891 units, increasing 60.1% and 68.5% year on year.

India may also be an important market for EV sales, with ambitious government targets and incentives being recently announced. Indian automakers could be well positioned to meet some of those targets, but having EVs delivered from Chinese production plants might be needed to meet those Indian government mandates. In late March 2016, Piyush Goyal, India’s minister of state for power, said India has the potential to become the first nation of its size to be 100% electric vehicles by 2030. Government policies set in 2013 laid out India’s goal to put six to seven million hybrid and electric vehicles on its roads by 2020. The country has been subsidizing new EVs as well as conversions to electrify existing traditional gasoline and diesel engine vehicles.

India’s largest automakers are just getting started in EV production and sales. Tata Motors is moving towards hybrids and electric vehicles. The Mumbai-based company, traditionally dependent on diesel engines, is working on partial hybrids and all-electric drive systems for its future list of passenger vehicles. Mahindra recently launched its first EV, the e20 low-priced electric car, in the United Kingdom.

China’s top carmaker SAIC Motor Corp, and Great Wall Motor, its biggest maker of SUVs, are leading the way on selling new vehicles in India, one of the world’s fastest growing auto markets, as growth at home in China stagnates. Both SAIC and Great Wall are producing EVs, and could make these products part of their market strategies in India. Major automakers like Nissan are looking at both China and India to best serve their global EV sales targets.