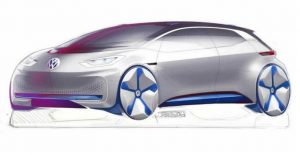 A lot has changed in the global auto market over the past year, since the Volkswagen “dirty diesel” scandal broke. The Paris Motor Show used to be a platform for French and German automakers to show off their latest high-performance diesel cars. That’s been backtracked in the wake of the VW diesel recall and litigation, and with pressure being put on European regulators to crack down on carmakers for diesel emissions. Electric cars are expected to play a larger role in the European market in the years ahead.

German automakers are feeling pressure from the attention and sales gained by Tesla Motors in the luxury electric car space in Europe, North America, and China. Stars of the Paris auto show for a few automakers will be their latest electric vehicle technologies. Mercedes-Benz will unveil the first electric car from its new lineup of Tesla-fighting models.

The biennial Paris Motor Show is considered one of the most influential in the world, along with the Frankfurt show which switches with Paris in odd-numbered years. Paris is where several models are rolled out for the new model year in Europe and other markets, and is said to be the world’s biggest motor show in terms of attendance. The Paris Motor Show hosts its media day Thursday, Sept. 29, and is open to the public Oct. 1-16. Here’s what’s been announced so far……………

Volkswagen reveal:  As seen in the photo above, VW has been building suspense over the unveiling of its new concept car this week. It’s expected to be somewhere around the VW Golf in size and should compete directly with the BMW i3. It will be the first new model built on the automaker’s MEB modular electric platform. Its battery in-flat-floor architecture is built within a futuristic exterior design with a glass roof, artistic wheel covers, digital headlamps, and sliding rear doors. It’s expected to hit production level in 2019 and could be the first of the automaker’s Strategy 25, where the company will be building up to one million EVs by the middle of the next decade. The German automaker has been focusing on this strategy as part of its recovery from Dieselgate. VW says the concept car will be as “revolutionary as the Beetle was seven decades ago” and “has the potential to make history.” (Those interested can view a set of design sketches on the electric concept car.)

VW’s Porsche brand will unveil its Panamera plug-in hybrid electric vehicle. The large luxury hatchback will have a range of 31 miles and top battery-powered speed of 86 mph.

VW has had to tighten its budget to recover from the diesel scandal, and to pay for all the settlements and recalls. Earlier this month, Hinrich Woebcken, the head of VW’s North American operations, said that the automaker has decided to end all U.S. diesel sales. As for the Paris Motor Show, VW decided to not demonstrate its Bentley and Lamborghini supercar brands this year to cut back on costs after being hit hard by the emissions scandal.

Electrifying product launches: There will be a few more electric car announcements expected to be made in Paris.

Automakers starting to skip out of auto shows:  In a surprising move, several automakers decided for the first time to skip the Paris Motor Show. Ford, Mazda, Volvo, Rolls-Royce and more (including, as previously mentioned, Bentley and Lamborghini) won’t be attending and displaying cars. That’s bad news for others cities with large auto shows, especially Detroit, Los Angeles, New York, Geneva, and Frankfurt. While these auto shows have been known to draw millions of visitors, along with executives and journalists, automakers are finding new channels to launch new vehicles.